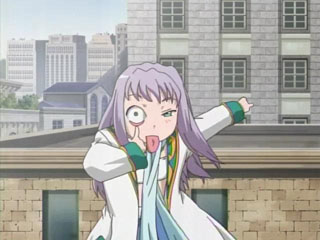 "You couldn't catch me in a hundred years! Bleah!"
Advertisement:

This is the act of pulling down one lower eyelid and sticking out the tongue and saying Bleah!

In Japan, this is referred to as akanbe (a corruption of akai me, "red eye"), and it's called mon œil ("my eye") in France and Quebec.