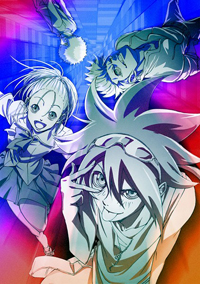 An anime that appeared as part of NHK's Fall 2011 Anime lineup. Produced by Sunrise, it premiered on October 2, 2011. It's directed by Junichi Sato, written by "Hajime Yatate" and while it has average animation quality (greatly improved in the second season), the series employs an all-star voice cast.

Kaito, a puzzle-loving high school freshman, is drawn into the strange world of "Phi Brain". He gets a strange device that sends him puzzles and, on occasion, directions to a certain location. Taking this as a challenge, he and his friend, Nonoha, decide to follow their directions, only to be forced to solve puzzles that have a dangerous touch of Death Trap to them. These are the "Philosopher's Puzzles": dangerous puzzles that, if left unsolved, will cause some sort of disaster. Not only that, but there is a mysterious organization known as POG that's activating these puzzles and are specifically targeting Kaito in order to force him to solve them.

In season two, Kaito and friends are finally able to enjoy a period of normalcy, but this peace is soon shattered by the appearance of the Orpheus Order. Whilst their leader claims to have been betrayed by Kaito in the past, Kaito and friends' actions in the previous season have earned their everlasting enmity. The Orpheus Order ups the ante with manmade Death Trap puzzles and display that they are more than willing to pull innocent bystanders into the fray if it means furthering their goals.

In season three, Kaito attempts to restore the memories of his mentor, Jin, after the events from season one. However, he and his friends encountered a mysterious girl named Raetsel, who happens to be someone that Jin knew in the past. It turns out that she and another man named, Enigma, want to fulfill Jin's wish which is to destroy all puzzles.