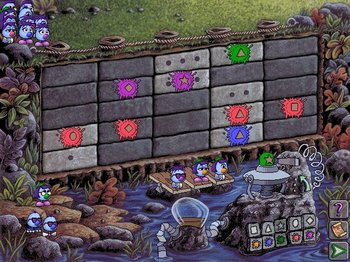 A Stock Puzzle that presents a grid, and a bunch of elements that must be put in appropriate cells of the grid. There are usually constraints in which elements must or cannot be placed in the same rows, in the same columns, in the same diagonals, or touching on certain cell boundaries. The constraints may or may not determine a unique solution.
Advertisement:

Unlike the sliding block puzzles (such as 15 Puzzle and Klotski) and Rubik's Cube, there are no restrictions on the way elements can be repositioned, except for possibly a few cells fixed at the start. Once you think you have figured out a solution, you're free to put any available elements where you think they ought to be. (The selection and availability of elements is non-random, too.)

Usually the grid is square, but it need not be quadrilateral; it could even have irregular boundaries.