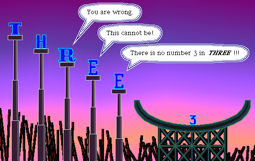 3 in Three is a classic puzzle game for the Apple Macintosh, designed by Cliff Johnson and published by Cinemaware (and by Inline Design after Cinemaware went bankrupt). It stars 3, an instance of the number 3 in a computer. The game starts with the 3 being rounded off from a spreadsheet, just as the computer crashes. As a result, she is sent deep into the innards of the computer, where she has to solve a number of puzzles in order to get it working again, all the while dealing with a plethora of letters, most of whom have never heard of numbers and think that she's a damaged B. Along the way, she must also deal with the misfit vowels, a bunch of vowels that have become corrupted and are threatening the word processor; an anti-virus robot that seeks to delete the 3; and an unknown mastermind who seeks to eliminate all letters.

. Everything players need to get it running is there, not only on the Macintosh, but on Windows as well.