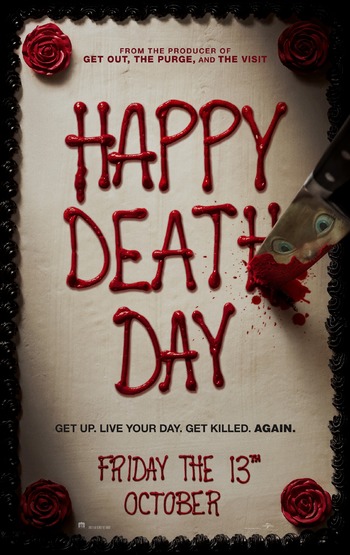 Happy Death Day is a Slasher Comedy Movie released on October 13, 2017. It was directed by Christopher B. Landon and written by Scott Lobdell.

Teresa "Tree" Gelbman (Jessica Rothe) is a college student who finds herself endlessly reliving her birthday over and over again. It begins with her waking up in a random guy's bed after drinking, and ends with her getting murdered by a masked man. After realizing what is going on, she attempts to figure out the masked man's identity and motives and prevent her death, but it won't be easy.

A sequel entitled Happy Death Day 2U released in 2019. In it, Tree finds herself in another time loop and facing a new killer who is going after her and all her friends. A third film, Happy Death Day to Us, is in development.