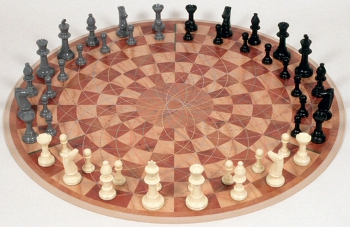 Now that's just silly.
World President: So this will be our home for the next few weeks. I hope you play a good game of 3-dimensional chess, Captain.
Captain Brown: I play a very good game, sir.
— Captain Scarlet and the Mysterons
Advertisement:

It's the far-flung future, or an alien planet, or even a Wizarding School. The two characters are talking about the latest plot point over a game of Chess.

No wait... It looks like chess (or checkers or what have you), but it isn't quite the chess we know. It could have multiple, circular, or other odd boards. It could be that the pieces are sentient. It could be something as simple as a different motif for the pieces, or a new unique piece or two. But in some way, the characters are playing a different board game. The characters may or may not still use terms like "Checkmate".

Two of the most common variations are chess with humans for pieces, and layered boards. Outside of anime conventions and renaissance fairs, the "living pieces" version has understandably negative connotations, being a favored trope of villains.

From a narrative and world-building standpoint, this strange, alien board game serves to establish the setting as different from our own in a simple way, while maintaining some verisimilitude by showing the characters do, in fact, play board games. This may be why layered boards are a common choice, as they are visually distinctive (or were, at some point). The game may not even be much like chess or any other game of ours, but as a visual trope the rules often won't come up anyway.

"Fantastic Chess", "Wizard Chess", and "Future" or "Space Chess" are more specific terms based on setting. Human Chess is a subtrope (so see that page for those examples). Also see Smart People Play Chess. House Rules can act as a Justification depending on the circumstances.

puts the number at over 2000 (and that's only counting published ones), with the amount perhaps unlimited. Some of these even enjoy a fair following. Since WWI a subgroup, which includes unusual problems as well as non-standard pieces, known as "Fairy Chess" has been popular, engendering multiple international organizations of players and theorists. See also this page

open/close all folders
Board Games
Most Board Game companies have "unsolicited submissions" piles filled with new Chess Variants. At least one of the 5 biggest RPG manufacturers in America automatically rejects them. While they are neat in fiction, and may even be fun to play, they never sell well enough to be worth it unless there is a popular license attached.
Anime and Manga
Comic Books
Commercials
Film
Literature
Live-Action TV
Tabletop Games
Video Games
Web Comics
Web Original
Western Animation
Real Life