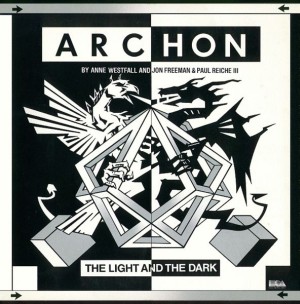 Archon: The Light and the Dark is a strategy game designed by Paul Reiche III and Jon Freeman and programmed by Anne Westfall (whose production company was Freefall Software), originally released in 1983 for Atari 8-Bit Computers and later ported to other computer systems (as well as the Nintendo Entertainment System). The game is very similar to chess, but instead of piece capturing being automatic, when two pieces meet on the same square, they are transported into a two-dimensional arena where they have to fight for survival.
Advertisement:

Each side is given eighteen units - seventeen fighters and one spell-casting piece. The game ends when one side eliminates the other side's fighters, or if one side takes control of all five designated "power points" (flashing squares on the board that can't be targeted by magic). There are also light and dark squares on both sides of the board, as well as color-neutral squares that cycle between light and dark as the game goes on. Units that are fought on squares of their color get a HP advantage, while units on opposite colors (e.g. a dark unit on a light square) have their hit points reduced. Careful unit placement and type matching are essential to claiming victory over your opponent.

If you want to see the numbers behind the monsters, a great technical analysis of the game and the pieces is here.

The sequel, Archon II: Adept, was more complex and focused on the four elements rather than light and dark. Each side (Order and Chaos) starts with four Adepts each, and all other pieces must be summoned to the board. Each side has its own selection of Elementals, but the same four Demons. Order's Elementals are relatively straightforward - the Giant, the Kraken, the Thunderbird, and the Salamander all just shoot things at their opponent (approximately equal in power and speed to the first game's Golem, Water Elemental, Unicorn, and Basilisk, respectively). Chaos's Elementals are harder to use - the Behemoth has a powerful but short-range punch, the Siren has a singing attack that affects the enemy regardless of where it is (but leaves the Siren herself immobile and vulnerable while she's singing), the Firebird is essentially the same as Archon's Phoenix (but can cut its flame animation short), and the Ifrit is the only straightforward piece, a clone of Archon's Genie. The four demons all have unusual mechanics - Juggernauts attack by hurling themselves at their enemy (acting as their own projectile), Wraiths have an aura that steals heath and adds it to their own, Gorgons slow and eventually petrify their enemies instead of damaging them, and Chimeras cycle through three attacks (a long-range fire blast, a mid-range gas blast, and a melee tail sting). The game did not fare nearly as well as its predecessor, possibly due to the increased complexity and brutal AI difficulty.

Archon III: Exciter was a Commodore64 Fan Sequel that tweaked Adept, and was fairly slow-paced and buggy. All the pieces had the same attack, an aura resembling that of the Banshee from the original game, with the only difference being their health.

Finally, in 1994, Archon Ultra was released. It turned the board on its side (so the pieces started at the top and bottom), gave the game a pseudo-3D view of the playfield, classified characters and attacks as Ground or Flying (Ground attacks generally can't hit Flying pieces), improved some character attacks (most have a new effect by holding in the attack button, like the Wizard's expanding shots and the Valkyrie's controllable javelins), and, most dramatically, added a second combat ability to each piece (some offensive, some defensive, some adding mobility).

Not to be confused with Achron.