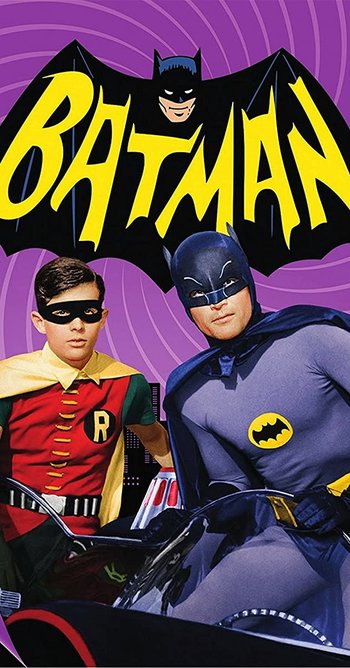 Holy tropes-on-this-very-wiki, Batman!
"But wait, the wildest is yet to come!"
Advertisement:

Batman is the campy, colorful, comedic adaptation of the titular comic book character, produced for ABC from 1966 to 1968. It featured Batman (played by Adam West) and Robin (played by Burt Ward) foiling daffy and innocuous criminals via detective work and slow fist-fights which were punctuated by large comic-style POW!s, BAFF!s and ZONK!s.

Producer William Dozier and head writer Lorenzo Semple, Jr. were assigned to create the series. Not being big fans of the comics, they hit on the idea of lampshading and parodying the over-the-top tropes of comics and the square humorlessness of superheroes. The result was an instant smash hit that appealed to both kids and adults: children tuned in for the superhero adventures, while adults caught the jokes and satirical humor.

With its intentionally absurd writing (particularly Batman's array of gadgets, which seemed large enough to cater for any given situation — the legendary Shark-Repellent Batspray comes to mind) and shonky production values, this was more like a televised pantomime/vaudeville/burlesque than anything resembling portrayals of superheroes in modern day media. The series managed to become something of a cultural icon, but it is also partly responsible for the general public's dim view of comic book writing and comics in general today, as even at the time comic book writing was taken far more seriously.

For most of its run, Batman aired twice a week, on successive weeknights (which was unusual at the time). The episodes were two-parters; a cliffhanger punctuated the end of the first episode and the narrator iconically told the audience to "tune in tomorrow — same Bat-Time, same Bat-Channel!" The series switched to airing once a week in the final season.

Batman: The Movie, an original theatrical feature film based on the series, was released in 1966. Among other things, the movie's larger budget provided the Dynamic Duo with some additional vehicles that stuck around for the remainder of the TV series (by recycling footage from the film): the Bat-Boat, the Bat-Copter, and the Bat-Cycle.

The series still tends to be polarizing. Many enjoy it for its sheer farce and surrealism — or for its nostalgia value — but at the same time, many modern Batman fans consider this Batman to be the opposite of the Batman they know and love. Many comics fans also consider the show to be responsible for tainting an entire medium in the eyes of the general public; to this day, mainstream news stories about comic books

are likely to have headlines like "Pow! Zap! Wham! Comic Books Aren't Just For Kids Anymore!" The series is sometimes blamed for causing the Batman comic line to adopt a "campier" tone as well, but in truth the main difference between this series and the "New Look" Batman comics that immediately preceded it was that the TV show was intentionally funny. The series did play a key role in the continued existence of the entire Bat franchise, however; comics sales had been in a serious decline, but the series provided a great deal of publicity, which led to a much-needed sales boost in Batman comics. In addition, the series was highly influential: Cesar Romero, Frank Gorshin, and Burgess Meredith would become the template for future Jokers, Riddlers, and Penguins. The creators of Batman: The Animated Series even acknowledged the legacy of Adam West's Batman by paying him homage in one of the episodes.

The show's legacy continued long after its cancellation. Almost a decade later, Adam West and Burt Ward would reprise their roles on The New Adventures of Batman, a Filmation animated series which competed with Hanna-Barbera's Superfriends. West would eventually wind up voicing Batman on the last two "Super Powers" branded seasons of Superfriends. (Robin continued to be played by his longtime Super Friends voice actor, Casey Kasem.) The show's style also influenced Superman: The Movie, the first ever big-budget superhero film.

West and Ward would play Batman and Robin in live action one final time (joined by Frank Gorshin as the Riddler) in the 1979 TV Legends of the Superheroes specials. In the early 2000s, West and Ward (again joined by Gorshin) portrayed cartoonish versions of themselves in the CBS movie Return to the Batcave: The Misadventures of Adam and Burt, consisting of a modern day plot to find the stolen Batmobile mixed with flashbacks to the events behind the scenes of filming the series in the 60s. In 2015, Ward revealed

he and West would be returning for a full-length animated movie for the series' 50th anniversary in 2016. This was followed by a sequel in 2017, Batman vs. Two-Face, where Two-Face (who had never appeared on the show) was played by William Shatner. It was West's final outing as he passed away that year. Most recently, Ward made a cameo as an aged Dick Grayson in The Teaser of the Arrowverse crossover event Crisis on Infinite Earths (2019), establishing this show as Earth-66 of the Arrowverse's multiverse.

Batman '66, a digital-first comic based on the series, with license to the rights for all the actors on the show, and written by Jeff Parker of Aquaman and Marvel's Agents of Atlas; it ended in 2015 with print issue #30. The popularity and critical success of this series led to a number of crossover miniseries, including Kevin Smith and Ralph Garman's Batman '66 Meets The Green Hornet, Ian Edginton's Batman '66 Meets Steed and Mrs Peel, Jeff Parker and Marc Andreyko's Batman '66 Meets Wonder Woman '77, Jeff Parker and Michael Morici's Archie Meets Batman '66, and Parker's own Batman '66 Meets The Man from U.N.C.L.E.. Parker also introduced versions of some characters who post-date the series. The Lost Episode, adapted by Len Wein from a rejected Harlan Ellison treatment, also features the first appearance of Two-Face in this continuity.

For many, many years, the show was never given any sort of proper home video release, which was especially awful in light of the TV-on-DVD boom. Reasons for this varied, with some of the issues cited being music licenses, royalties for the numerous "Bat-walk" cameos, and the fact that Bat-media as a whole is owned by Warner Bros. while the series and its various elements are owned by Disney (through their acquisition of original owner 20th Century Fox in 2019), which by coincidence owns DC rival Marvel Comics. (This only applies to the show; Batman: The Movie has no such issues.) In early 2014, Warner Home Video confirmed the entire series would be released in one gigantic box set later in the year.

(It also has more affordable separate season sets for non-collectors.) Burt Ward later confirmed the release date for the set as the 11th of November 2014 – just in time to celebrate Batman's 75th anniversary.

If you want Batman played Darker and Edgier than the Bright Knight, see Tim Burton's 1989 film (and its 1992 sequel), Batman: The Animated Series, Christopher Nolan's The Dark Knight Trilogy and the DC Extended Universe. For a more modern take on Batman that retains the Silver Age fun-factor/Camp absurdity combo of the series, see Joel Schumacher's Batman Forever. For Silver Age fun-factor with more tasteful Camp absurdity, see Batman: The Brave and the Bold. For a Darker and Edgier take nonetheless heavy on Camp, see All-Star Batman & Robin, the Boy Wonder. And for camp absurdity minus the Silver Age fun-factor, see Schumacher's Batman & Robin.