Abled in the Adaptation 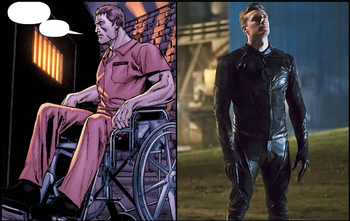 Hunter Zolomon in The Flash comics (left) and The Flash (2014) (right).
Advertisement:

Sometimes in adaptations a character's physical or mental illness is removed or downplayed compared to the source. This could be for pragmatic reasons (such as the disability being difficult to adapt) but often times the disability is simply removed. One reason for the removal is to make a character more threatening.

Sub-trope of Adaptation Deviation. Compare to Throwing Off the Disability and Adaptational Skill and contrast with Disabled in the Adaptation.