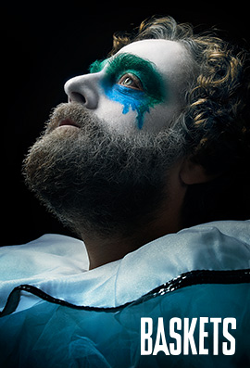 Baskets is a Black Comedy / Dramedy series that first aired in January 21, 2016 on FX. It follows Chip Baskets (Zach Galifianakis), a flunkee of a French clown academy who returns to his hometown in Bakersfield, California only to be stuck as a low-life rodeo clown. The series mostly plays out as Slice of Life but ventures into darker territory in dramatic moments and concerning Chip's failed ambitions.