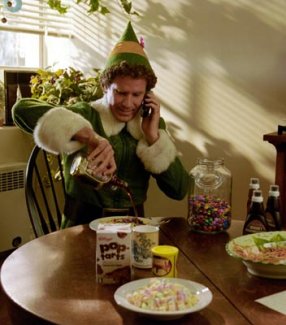 Santa Claus and his elves encouraged his inner child when they raised him.
"Why can't my grandpa act his own age?"
— Candace Flynn, Phineas and Ferb, "Get That Bigfoot Outa My Face!"
Advertisement:

Sometimes people just fail to develop into social or intellectual maturity. Maybe it's due to a very loving but confining mother or father, who don't suggest or won't let them get a job and move out, enabling their laziness or dependence instead. Maybe they were never taught any responsibility growing up, and now that they're adults, it's too late and they're set in their ways. Maybe they're a Spoiled Brat who's learned to manipulate their parents into doing what they want, and the parents came to the conclusion that it's just easier to indulge them than to fight about it. Or maybe they just didn't want to leave the nest. Maybe they've been intentionally secluded from learning about the world. Or they grew up as a neglected orphan without a proper education or any guidance towards adult life. Maybe their parents or legal guardians simply failed to teach them how to do things like cook for themselves, keep their home clean, balance the checkbook, make and stick to a budget, pay bills and taxes, do minor home repairs, or change a tire. Maybe they were literally Raised by Wolves. Maybe it's the result of brain damage, an intellectual disability or developmental disorder, or something sinister. Perhaps they just never had a life-changing moment involving a shotgun and a beloved pet. Maybe it's just a form of Mars-and-Venus Gender Contrast, or they live in a society with certain gender roles, where one sex is expected to be the responsible one, and the other is not expected to be (and is not always taught to be). Who can say?

Although the causes might not be clear, the effects are. The Man-Child, a term invented by William Faulkner, is usually an adult who possesses a very childlike or (stereotypically) childish demeanor. He's emotionally both simple and fragile; he prefers (although does not always need) to have a parent figure to look after him. He usually isn't very worldly and is typically pretty gullible. The Man-Child's interests are usually what most people consider to be immature or childish, sometimes even in comparison to actual children.

The character is almost Always Male. This is (presumably) to contrast the differences between him and "normal men" with the normal responsibilities and wisdom of adulthood. The female version is usually split between The Ingenue, the Genki Girl, or other tropes which highlight an adult woman's child-like attributes rather than her grown-up persona. Manchild has many more negative connotations than The Ingenue; the manchild's immaturity and lack of outward adult behavior is emphasized as being a bad thing versus being an emphasized good thing like The Ingenue's purity and idealism. This is also because of the Double Standard most societies have, which exist for various reasons, where they expect more from men than they do from women. More contemporary works are increasingly likely to play female examples as unsympathetic (or, at the very least, deeply flawed), with a characterization that is fairly similar - irresponsible, unreliable, unable or unwilling to meet basic adult responsibilities on their own, and dependent on others. When portrayed unsympathetically, female examples are typically more dysfunctional than male examples, as their parasitism is typically aimed at partners (usually viewing them as meal tickets and lifestyle subsidizers, and often cheating on them when they grow bored with them or find a better provider), and they also tend to have more severe mental health issues and are more likely to have serious issues with substances.

On the Brain Chain, the Man Child occupies a space between The Cloud Cuckoolander and The Ditz, but without necessarily becoming The Fool. He usually does not have The Fool's luck, but he doesn't necessarily play the role of the Butt-Monkey either. Although the Man-Child is commonly portrayed as being mentally challenged, he does not necessarily have to be. In many cases, the character may be very intelligent, and even leave the idealism aside and be very shrewd in business or career, but this only throws him deep in the Uncanny Valley when others find out his emotional immaturity. Alternatively, his childlike qualities/way of thinking, when intelligently applied, can be a basis for his success as a businessman, in which case he's also The Wonka.

In comedic works, he usually plays the role of The Ditz. In dramatic works, he could be the Jerk with a Heart of Gold due to his simplicity or immaturity, or the sympathetic character we come to love. Sometimes the Man Child embarks on a late-in-the-day Coming-of-Age Story, which ushers him into true adulthood. Note that usually Sex as Rite-of-Passage works only some of the time. In many instances, a Man Child is not necessarily a virgin, but only sees sex as a tool of pleasure and does not recognize its emotional significance. If he ever gets married, it's likely that his wife will end up being a mother-figure not only to their children but to him as well, doing all the "emotional labor" needed to keep the household afloat while he just coasts along and drags her into all sorts of wacky hijinks. If he doesn't, there's a good chance that he's a Glorified Sperm Donor - he very likely knocked up an ex or casual sex partner, but plays no role in the child's life whatsoever, either because he can't or because he won't (quite often both).

Some will agree that this is Truth in Television for certain people, as there do exist many immature adults out there who refuse to grow up. Sometimes it's just people who are capable of engaging in adult responsibilities but have childlike interests and personalities in their free time, other times it's adults who somehow have all the knowledge capable of living independently yet the emotional maturity of a spoiled child. The likeliest cause of the man-child is a sheltered upbringing or mental illness, particularly Peter Pan Syndrome