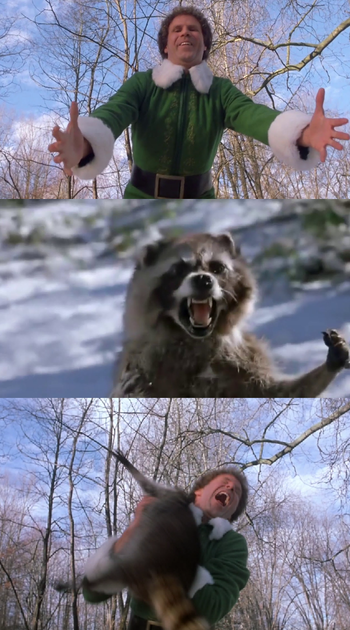 There's an old story in which a boy encounters a rattlesnake. The snake asks the boy to pick him up and be his friend. After the boy does so, the snake bites him. When the boy, now dying, asks, "Why did you bite me?" the snake merely responds, "You knew what I was when you picked me up."

Some characters in fiction suffer from the same delusions. No matter how dangerous an animal is, no matter how sharp its teeth or claws are, no matter how many people it has eaten, they insist that it's perfectly safe to be around and get cozy with. Sometimes this stems from a mindset that Humans Are the Real Monsters or "we can learn so much about them", but more often than not, it leads to someone else getting killed or seriously injured. Done well, this can lead to An Aesop about watching yourself around wild animals. Done poorly, and it will come off as needlessly cruel.

This is a subversion of Friend to All Living Things or the Mountain Man. Compare The Farmer and the Viper which is about good deeds being repaid with evil (and a variant of the "old story" described at the start). Characters like this usually are a Horrible Judge of Character except applied to animals instead of people, and will often be Too Dumb to Live. A character may become this if he loves animals but Animals Hate Him. If the person actually succeeds in getting bloodthirsty, vicious animals to like them, they're a Fluffy Tamer. May be a member of an Animal Wrongs Group. Can also be related to Nature Is Not Nice. Subtrope of Animal Lover.