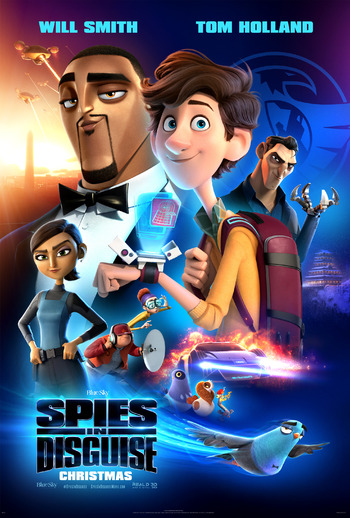 Super spy. Super fly.
"Being a pigeon can make you an even better spy. Pigeons are everywhere, and nobody notices them. In fact, pigeons can see in slow motion. And pigeons can fly up to ninety-two miles per hour."
— Walter Beckett

Spies in Disguise is an animated spy comedy film loosely based on the short Pigeon: Impossible, produced by Blue Sky Studios and starring Will Smith and Tom Holland. It was released on Christmas Day 2019 and the first Blue Sky work released through Walt Disney Studios Motion Pictures.

Lance Sterling (Smith) is the world's greatest spy, who uses gadgets designed for him by the socially awkward genius Walter Beckett (Holland). An unexpected event forces them to rely on each other more than ever in order to save the world, but there's one small problem... namely, Lance was turned into a pigeon by Walter. Hilarity Ensues.