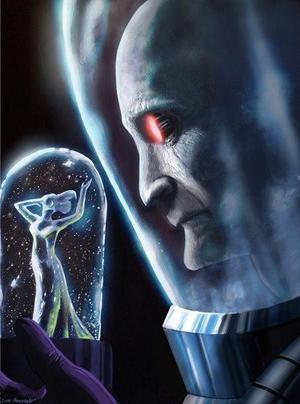 A particular Deconstruction of the villain, a Tragic Villain is completely aware of their evil but takes little to no pleasure from it; in fact, they could very well resent the evil they are committing. Rather, they were driven to villainy due to circumstances beyond their control. In many circumstances they are the Tragic Monster, perhaps an innocent person transformed into a mindless monster, or simply created to be a monster; either way they have no choice in the evil acts they commit and are as sympathetic as their victims.

Or maybe a hero was forced to commit a necessary evil, and occasionally any kind of villainy against their will, and never forgave themselves, deciding they were now a villain beyond hope/not deserving of salvation or redemption, possibly becoming a Death Seeker in the process.

The Knight Templar is quite frequently portrayed as this; given that many of them are meant to mirror real-life figures. One who stops attacking potential rebels may realize how his orders are doing more wrong than right, but the side of good will never take him... there's no turning back from where he is standing. Of course that wouldn't stop a Knight Templar from coming to regret their actions.

Highly sympathetic ones may be Anti-Villains and prime candidates for redemption, but also everything associated. Compare to Well-Intentioned Extremist, who commits evil actions in hopes of producing good results.

Compare Byronic Hero, who is a similarly sympathetic but flawed and morally conflicted character. Overlaps with Woobie, Destroyer of Worlds when their destruction is a result of the extreme mistreatment they have endured: alternately, Love Makes You Evil, where a character acts in a villainous way because they lost someone or something they loved, or simply never had anyone love them to start with.

Contrast Complete Monster, a villain who is pure evil and devoid of humanizing qualities. (A Tragic Villain could become such if they lose their sympathetic traits or take actions that overwhelm said traits.) Not to be confused with the Fallen Hero (although Fallen Heroes tend to make Tragic Villains, as discussed above) or the Tragic Hero, where the emphasis is on the character's tragedy rather than their good/evil alignment.