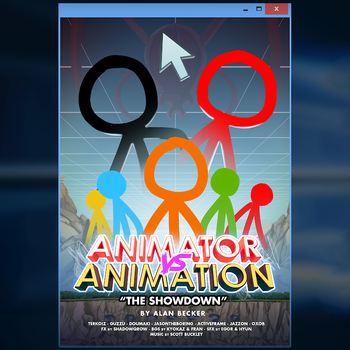 The main characters of the series.note Pictured (top to bottom, left to right): ViraBot, the Animator, the Chosen One, the Dark Lord, Yellow, Blue, the Second Coming, Green, Red. Not pictured: victim, Purple, Orange and many side characters.
Advertisement:

An animator is pitted against his creation, the Animation.

That's this work in a nutshell. But the fun part? The craziness that ensues goes on a higher level each new installment! Created on Adobe Animate and posted on YouTube, Newgrounds and DeviantArt by Alan Becker, aka noogai

(who, by now, is not at all a new guy), it stars himself as the animator who'd draw a stick figure for...well, animating. It's just that they go sentient and use various methods to attack him, prompting him to fight back. They can also exit his animation program! The full series can be watched on Alan's Youtube channel

(For tropes regarding each individual episode, check the "Recap" page)
Feedback