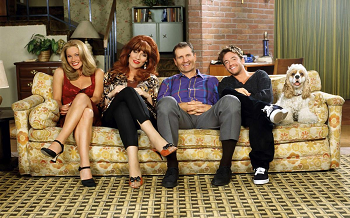 Often not a Cool Chair.
Advertisement:

What's a Dom Com without a couch? It's usually center-stage and positioned so that anyone sitting there is facing directly into the audience; presumably it's right in front of the Fourth Wall. Sometimes a TV is set between it and the audience. The couch is typically set in the center of the room, rather than pushed against a wall, so that standing characters can converse with sitting characters while both are still facing the audience.

And everybody sits on The Couch at some point during each show. Even the dog. They probably sit in the same place every time, too.

If you can remember the show, you can almost certainly picture the living room (or coffee bar) and the requisite couch.

The couch is, of course, prepackaged in Standardized Sitcom Housing (however, you do have to buy your own TV), and can often be found in a Social Semi-Circle. (That said, don't put two gamers on it).