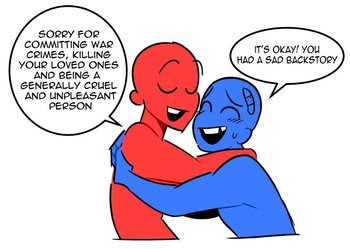 Used with permission.
"Oh look, grandpa, it's that guy who kidnapped your soul and then tried to kill me. But now he's our friend."
— Yugi (referring to Pegasus), Yu-Gi-Oh! The Abridged Series
Advertisement:

They manipulated you, they betrayed you, they tried to kill you, really did kill you, tortured all your friends and loved ones, burned down your village, and even went and kicked your dog. Despite all this, you find it in your heart to forgive them. After all, "To err is human, to forgive is divine."

This trope describes a situation where forgiveness comes quickly after a character has committed some foul act. Within a season or maybe even an episode, foes become friends and whatever evil the forgiven character did is swept under the rug and forgotten. Whether or not this appears too easy from the perspective of the audience is not the point. Like all tropes it can be used well or poorly and played with in a number of ways. The character who committed the deed/s may be sufficiently apologetic to warrant forgiveness, or the latter character learning An Aesop may be considered punishment enough, or maybe The Punishment Is the Crime. Sometimes, showing a bit of trust to a former villain who doesn't seem to deserve it can lead to them becoming a reliable ally. Forgiving someone for their crime without their having earned it may inspire them to become The Atoner so that they can earn forgiveness. Conversely, forgiving too easily can be a character flaw that bites them in the ass. Often, someone who is quick to forgive is contrasted with someone who can't forgive the offender; depending on the story and which group is in the majority, the forgiving characters may come off as soft, the non-forgiving ones may seem vindictive, or both.

See also Karma Houdini (when the offending character is forgiven without as much as an "I'm sorry" or any sort of punishment), Forgiven, but Not Forgotten (where the hero is willing to forgive, but not if it happens a second time), Go and Sin No More (when granting forgiveness is the punishment, with the assumption that the offender will make amends), Honor Thy Abuser where a victim forgives their abuser and This Is Not My Life to Take (when a victim does not take revenge because they think someone else is more entitled to it). Contrast Reformed, but Rejected, where a villain does want to be forgiven and works for it, but doesn't get accepted. Easily Condemned, Rejected Apology, This Is Unforgivable!, and Minor Flaw, Major Breakup are the opposite tropes. Not to be confused with Flippant Forgiveness, which is more insulting than gracious.

She Forgave Her For The Tart

After seeing the White Queen and her sister reconcile, the Nostalgia Critic brings up all the Red Queen's war crimes and how it seemingly is swept under the rug because of tarts.

She Forgave Her For The Tart

After seeing the White Queen and her sister reconcile, the Nostalgia Critic brings up all the Red Queen's war crimes and how it seemingly is swept under the rug because of tarts.