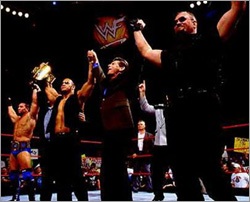 Ken Shamrock, The Rock, Vince McMahon, and the Big Bossman
"No chance, say that's what you got
Up against a machine too strong
Greedy politicans buying souls for us are puppets
Won't find their place in line
Now, tie a string around your finger now, boy
'Cause it's just a matter of time"
—"No Chance in Hell"
Advertisement:

The Corporation was a Power Stable in WWE led by WWE owner/chairman Vince McMahon. The group represented Vince's corporate empire and its purpose was to enforce his authority and punish those who defied it, such as "Stone Cold" Steve Austin and D-Generation X.

The group was formed at Survivor Series 1998 when Vince not only screwed Austin, but Mankind, whom had been loyal to Vince for several months, out of the WWF Championship

in a tournament. Vince and his corporate stooges Sgt. Slaughter, Big Bossman, Pat Patterson and Gerald Brisco, were joined by Vince's son Shane (who screwed Austin out of the tournament after pretending to be his ally) and his new "Corporate Champion", The Rock (who Vince "feuded" with heading into the event, and who won the WWE title in a remake of the Montreal Screwjob). They were later joined by Ken Shamrock, Shawn Michaels (who replaced Sgt Slaughter), Test, Kane, Chyna, The Big Show, Triple H, and the Mean Street Posse. The goal was to create a "corporate image" for WWE which was being threatened by the likes of Austin, Mankind, and DX. They would also later feud with the Ministry of Darkness.

Things started to fall apart for the Corporation in 1999. Despite Vince's efforts to keep the title off of Austin (even fighting Austin one on one in a steel cage), Austin would win the title back at Wrestlemania XV. A few members also left such as HBK ("fired" by Vince), Kane (after being backstabbed by Chyna), and Big Show (who Vince slapped, leading to Show punching him out). To make matters worse, the Ministry was constantly threatening Vince's daughter Stephanie during this time, and Vince shifted his focus away from his Arch-Enemy Austin in order to protect her. Shane would then turn against Vince and take over the Corporation. Other members such as Shamrock, Test, Patterson, Brisco, and finally The Rock would leave the Corporation, leaving only Shane, Triple H, Chyna, Big Bossman, and the Mean Street Posse. Shane would then reveal he was in cahoots with The Undertaker all along and the Corporation would merge with the Ministry of Darkness to form the Corporate Ministry. Both Shane and Undertaker had been taking their orders from a mysterious "Higher Power", who eventually revealed himself to be none other than Vince McMahon himself, pulling another Face–Heel Turn for masterminding his own daughter's kidnapping just to get the WWE title off of Austin.note The exact circumstances of how Austin lost the title were largely ignored because the match, with Undertaker defeating Austin, took place at Over the Edge 99, which is the same PPV where Owen Hart died. The Corporate Ministry, and thus the Corporation in general, would finally collapse after Austin retained his title at Fully Loaded 1999, which as a result Vince was "banished" from WWE (he came back a couple of months later of course).

The Corporation would use "No Chance in Hell" as its theme music following the 1999 Royal Rumble (the song was the PPV's theme song), and it would later exclusively become Vince's theme. After it merged with the Ministry of Darkness their theme became a Dark Reprise of "No Chance in Hell".

Not to be confused with the 2003 film The Corporation.