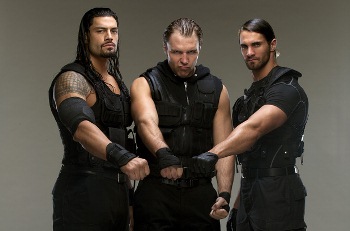 The Hounds of Justicenote From left to right: Roman Reigns, Dean Ambrose and Seth Rollins.
"We're not renegades. We're not mercenaries. We're not The Nexus. If you're lookin' for the nWo, go buy the DVD. We're about principles. We're about honor. Where honor no longer exists, we're going to step in. We're a shield from injustice... we are The Shield."
Advertisement:

The Shield (nicknamed The Hounds of Justice) was a professional wrestling stable in WWE, founded by Dean Ambrose, Roman Reigns, and Seth Rollins. The black-clad group debuted in November 2012 at the Survivor Series pay-per-view during the CM Punk vs. John Cena vs. Ryback Triple Threat match for the WWE Championship. The trio made an immediate impact as they attacked Ryback and put him through the announcer table, using their triple powerbomb maneuver to incapacitate him. After that, The Shield ran rampant in WWE, destroying anyone who got in their way. As part of their gimmick, their goal was "bringing justice" to WWE, even if it meant attacking fan-favorite wrestlers for no apparent reason.

By August 19, 2013 Raw, they were clearly the hired goons of The Authority, the new group of Vince and Stephanie McMahon, Triple H, Randy Orton, Kane, and Brad Maddox. The group began to distance itself from the Authority in 2014, ultimately pulling a face turn and finally breaking away from the Authority the night after WrestleMania XXX. As a result of said distancing, the Authority re-formed Evolution to deal with the Shield & the two factions feuded until the night after Payback, when Rollins turned on Ambrose and Reigns. Reigns and Ambrose, whilst still remaining allies, went their separate ways the following week.

At one point during the time the stable was active, each member held a WWE title: Ambrose was WWE United States Champion (and holds the record for longest reign of any United States champion since WWE acquired the title from WCW), and Reigns and Rollins were WWE Tag Team Champions together under the banner of the Shield. Rollins also held the NXT Championship early on in the Shield's run. Each member would also eventually go on to win the WWE World Heavyweight Championship (by pinning one of the others, no less).

On the October 9, 2017 episode of Raw, the Shield finally officially reunited when Rollins and Ambrose joined Reigns again to destroy The Miz, his Miztourage (Curtis Axel and Bo Dallas), Braun Strowman, and The Bar (Sheamus and Cesaro). Although this run was cut short by an injury to Ambrose, they reunited again at the end of the RAW after SummerSlam 2018 when Ambrose and Rollins came out to save Universal Champion Reigns from a Money in the Bank cash-in by Braun Strowman.

Unfortunately, the Shield dissolved once more on the October 22, 2018 episode of RAW after Reigns was forced to relinquish the Universal Championship and take a hiatus from wrestling thanks to the return of his leukemia. That same night, after winning the RAW Tag Team Championships for the second time, Ambrose snapped and turned on Rollins, ending the Shield for the foreseeable future...

...which lasted for all of 5 months, when Reigns returned after announcing that he had entered remission and was thus clear to wrestle again. Upon coming back, he motioned to reform the Shield one more time given that Ambrose had officially announced his decision to (legitimately) walk away from the WWE. Despite not giving a clear-cut answer when both Rollins and Reigns saved him from several attacks despite his attitude towards the both of them since October, he finally relented to a final reunion. Unfortunately, this was almost certainly a "final" reunion as Ambrose left WWE in early 2019 and proceeded to effectively burn his bridges with the company, making a later return to them and one more reunion of the Shield extremely unlikely.

Not to be confused with the FX cop drama, the Marvel Comics agency or the Archie Comics superhero.

BELIEVE IN THE SHIELD!