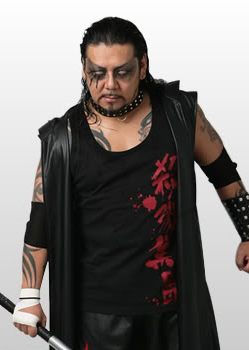 Yoshikazu Taru (born August 23, 1964) is a Japanese Professional Wrestler, better known by his ring name TARU. Initially a Karate practitioner, he decided to enter professional wrestling and joined Koji Kitao's Buko Dojo, which had a soft spot for karatekas. He had his debut as part of Kitao's entourage in Genichiro Tenryu's WAR promotion, but he ended up in Último Dragón's Toryumon circuit, where Japanese wrestling and Mexican lucha libre meet. Shortly after his arrival, he turned heel and joined the villainous gang Crazy MAX (composed by CIMA, SUWA and Don Fujii), which constituted a change of personality for him: he adopted his name to TARU in all caps as bad boys do, replaced his martial arts ways with eccentric Yakuza manners, and became the faction's manager, mouthpiece and occasional baseball bat-wielding fourth wrestler. Through many years TARU was part of Crazy MAX's adventures in Toryumon Japan, completing them with some comedy work with Stalker Ichikawa, and eventually outlasted the promotion when it was replaced by Dragon Gate. However, backstage struggle behind this change led him and SUWA to leave Dragon Gate. TARU moved then to All Japan Pro Wrestling, where he initiated a campaign of terror in midst of the Puroresu Love era by founding the incredibly extense and long-lived Voodoo Murders faction, where he was their leader for years. A scandal in which TARU personally beat his stablemate Nobukazu Hirai, which contributed to Hirai ending up in a coma, forced TARU out of professional wrestling (a detailed writeup of the incident can be read here

). TARU finally resurfaced in a new incarnation of the group in Pro Wrestling ZERO1, where he wrestles now.