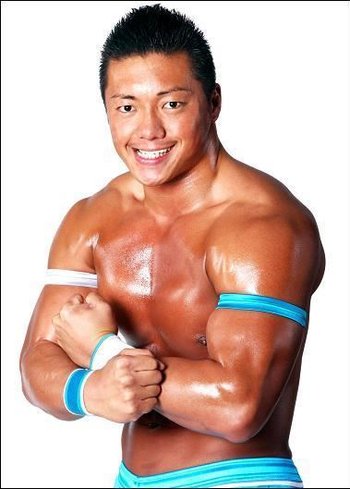 Nobuhiko Oshima (born November 15, 1977) is a Japanese Professional Wrestler, better known by his ring name CIMA. He entered professional wrestling riding a dream in Último Dragón's lucharesu circuit Toryumon, where he graduated in the very first class along with future allies and enemies. Here Oshima allied himself with Don Fujii, SUWA and TARU to form Crazy MAX, a villainous stable of punks, and he became himself its main star: a handsome, hyper young rebel from Osaka, now known as CIMA. After their return to Japan from training in Mexico, Crazy MAX ravaged Toryumon and gave years of nightmares to babyface wrestlers like Magnum TOKYO and his friends, as well as great battles against other baddie groups like Masaaki Mochizuki's M2K and Milano Collection A.T.'s Italian Connection. Having become himself a heroic figure out of sheer popularity, CIMA's career as the face of the promotion had just started, even although the latter broke away from Último Dragón to become Dragon Gate and Crazy MAX itself was lost in the shuffle. CIMA reinvented himself with the stable Blood Generation and gave DG a new flavor tilting towards American indy style, which became its trademark since and made countless connections among indy wrestlers around the globe. This lasted until 2018, when CIMA shocked the world announcing he would leave behind his beloved Dragon Gate to raise a wrestling promotion in China. Not much later, he would sign up with All Elite Wrestling, but the COVID-19 pandemic and related travel complications caused him to leave it.

"The Tropes of Evil":