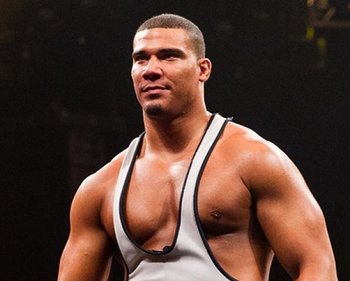 I'm the next generation of great!
Advertisement:

Nathan Everhart (born September 28, 1988) is an American professional wrestler and former amateur wrestler who is signed to WWE under the ring name Jason Jordan.

He signed a contract with WWE's developmental system in July 2011, and found moderate success as one-half of the penultimate FCW Florida Tag Team Champions

with CJ Parker before the titles were deactivated upon the switch from FCW to NXT. However, he struggled to gain any momentum under the revamped system for several years. In July 2015, fortunes changed when formed the tag team American Alpha with Chad Gable, with the duo capturing the NXT Tag Team Championships before being drafted to SmackDown and winning the SmackDown Tag Team Championship. In 2017, American Alpha disbanded after Jordan debuted on the Raw brand as the (kayfabe) son of Raw General Manager Kurt Angle. On the 2017 Christmas edition of Raw, he teamed up with Seth Rollins to become the WWE Raw Tag Team Champions. They lost the titles a month later at Royal Rumble 2018, and since then Jordan not wrestled due to suffering a neck injury that required surgery, and currently works backstage as a producer.