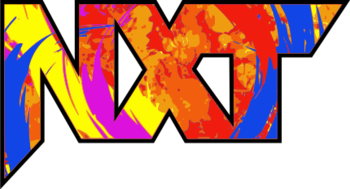 Down South slangin' rollin' with these hustlers.
"It started as a whisper...
Until you screamed it at the top of your lungs.
We gained momentum... you made us unstoppable.
We had a vision for change... you made it a revolution.
We told you "we are the future" until you told us... the future... is... now.
[the lights come up at the Barclays Center in Brooklyn, revealing a sold-out, 15,000+ crowd]
WE! ARE! N! X! T!"
— Triple H, at NXT TakeOver: Brooklyn
Advertisement:

NXT debuted on February 23, 2010 on Syfy, replacing the In Name Only ECW until it was moved to WWE.com a few months in.

NXT was originally a mix between reality television and a game show, and the main goal was for WWE to find the next breakout star. Each of the rookies were called up from WWE's developmental system, Florida Championship Wrestling (FCW), and had a WWE Superstar as a pro. The series was a competition for a WWE contract, and in some cases a shot at a certain title, with only the first four seasons having a clear winner: Wade Barrett, Kaval, Kaitlyn and Johnny Curtis. During the fifth season, subtitled "Redemption", the show slowly transformed into a C show for midcard talent.

After the fifth season concluded, NXT was revamped as a showcase for their developmental talent. The current incarnation of the show tapes in Orange County, Florida, and has been broadcast aired on WWE Network.

The brand later moved to USA Network, the current broadcaster of Monday Night Raw, and expanded into a two-hour, live broadcast on Wednesday nights beginning September 18, 2019. After retreating to Tuesday nights on April 13th 2021, having been on the losing end of Wednesday Night ratings warfare with competing promotion All Elite Wrestling, NXT was later revamped as NXT 2.0.

Originally, new contestants were meant to participate after the Season 5 would end, but it was later decided to retool the show into a developmental. The new faces would have included Seth Rollins, Big E Langston, Xavier Woods, Jinder Mahal, Damien Sandow, Bo Dallas, Hunico and Leo Kruger.

As a Developmental
The Retooled version of NXT began June 20th 2012. The new version saw the competition aspects being dropped as its function is to give the developmental talent a feel to be on TV. The location was moved to Full Sail University in Florida, with the developmental talent working separate house shows from the rest of the roster. The wrestlers from the main roster make occasional visits for various matches and short feuds. Unlike before, where it was either live or taped a few days in advance, 4 weeks of programming is now taped once a month.

NXT's first live televised event, ArRIVAL, aired on the WWE Network in February 2014, followed by TakeOver in May. Live Takeover specials have run every 2-3 months since, often taking the show on the road to larger arenas.

What needs to be noted at this point is the perception of this incarnation of NXT in the eyes of many fans and critics - that is, the perception of its high quality. NXT is, as a developmental project, booked a little shorter as a program (usually 1 hour for the main show and 2 hours for TakeOver events) and with a significantly larger degree of emphasis on work in the ring & match choreography as opposed to microphone promos. However, in the "most fans are Smart Marks" wrestling era of The New '10s, with Kayfabe long dead, an emphasis on actual ring performance and crowd working via action tends to result in what many, many fans and critics feel is a stronger product than the "main roster" WWE shows. NXT TakeOver: Dallas was a particular example of this, with popular and critical opinion being that it was a stronger show overall than WrestleMania 32.

As a result, it isn't surprising today to hear many wrestling fans call NXT "actual good wrestling" and even WWE would gradually knowledge NXT as its "third brand". In spite of this, and the fact that indie promotions such as Evolve Wrestling now arguably fill this role, NXT is still treated and perceived as a farm territory where its stars who prove to be skilled are "called up" to either the Raw or Smackdown brands. While this often means good things for the rest of WWE's product,note to date, Kevin Owens is perhaps the best example of an NXT talent bringing hype and improved quality to the "main roster" coming out of NXT several fans have grown protective of the brand and its approach to booking, and do not want to see NXT talent "wasted" in the politics-heavy, Vince-dominated environment of WWE's other brands. Even a few of the performers from the competition era feel that their careers have not been particularly well-handled by WWE's main creative team, and the way the women performers from developmental NXT are treated on the main roster, compared to how they were treated in NXT, has proven jarring and anger-inducing for nearly everyone.note One example is the feud between Charlotte, Becky Lynch and Sasha Banks, in which WWE is simply unable to give the matches clean finishes via Ric Flair interfering in his daughter's (Charlotte) matches, in spite of the fact that the women involved have proven many times that they are just as capable of putting on matches as powerful as any men's match.

Currently, there are five championships defended on NXT programming:

On 2018, a localized extension of the brand called NXT UK was opened in the United Kingdom, complete with its own Performance Center, television show (airing on the WWE Network) and PPVs. The inaugural PPV of the brand, NXT UK TakeOver: Blackpool took place on January 12, 2019. The brand recognizes four championships:

As a Competition
As a Developmental