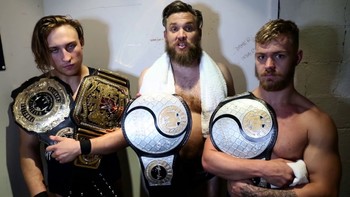 Kings of Kings. From left to right: Pete Dunne, Trent Seven and Tyler Bate
"This is everything. Norwich was made famous. The WWE UK was made famous. British Strong Style; we run the universe."
Advertisement:

British Strong Style is a Professional Wrestling Power Stable comprised of "The Bruiserweight" Pete Dunne (born Peter England; November 9, 1993), Trent Seven (born Benjamin Webb; August 21, 1981) and Tyler Bate (born March 7, 1997). Originally, Trent and Tyler teamed together as Moustache Mountain, with Pete Dunne teaming with his Kayfabe brother Damien. However, at Progress Wrestling Chapter 33: Malice in Wonderland, Trent and Pete turned on their respective partners under the banner of British Strong Style. They claimed that the eponymous British Strong Style of wrestling (a mixture of Japanese strong-style and British catch wrestling which Progress is heavily associated with) was a creation of the West Midlands of the UK, where each group member is from, "long before Progress was even a thing". At Chapter 35, Tyler Bate joined the group as well by turning on Damien Dunne, his tag team partner that night.