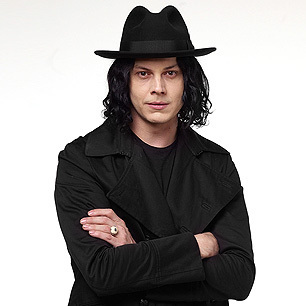 What do you mean, you don't listen to vinyl?
Advertisement:

John Anthony White (né Gillis; born July 9, 1975) is a Detroit-born musician best known for his work in Garage Rock/Blues Rock band The White Stripes. He bounced around bands during the Garage Rock-Revival in the late '90's before forming the White Stripes with his then-wife, Meg White (he took her last name). Before their eponymous debut was released, Jack and Meg divorced, but the band stayed together. The White Stripes officially disbanded in 2011 after having been inactive since 2009. In 2005, White formed a band called The Raconteurs with Brendan Benson and members of the Greenhornes. In 2009, he formed The Dead Weather with Alison Mosshart (of the Kills and Discount fame). White released his first solo album Blunderbuss in 2012, and his second Lazaretto in 2014. Two more albums followed; Boarding House Reach in 2018 and Fear of the Dawn in 2022, with a fifth album, Entering Heaven Alive scheduled for release in July 2022 as well.

He married Karen Elson in 2005 and had two children together, but they divorced in 2011.

He's known for his Hair-Trigger Temper and his DIY ethic. He currently runs Third Man Records in Nashville, TN where he records, produces and distributes records for other artists.