Putting the Band Back Together 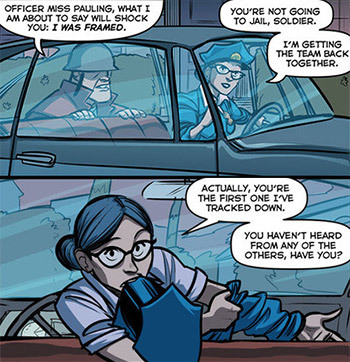 "We're putting the band back together."
— Elwood Blues, The Blues Brothers
Advertisement:

This nifty little scenario is common in sequels, especially after a Time Skip, but it can also happen at the beginning of a story, which basically just means that the original "Band" existed prior to it.

"Back then", the Ragtag Bunch of Misfits were kicking ass and taking names all over the place. Alas, the golden days came to an end, and they split up, took ordinary jobs, started families...

But now a new threat looms! And there's only one team that can solve it, so it's time to put the old band back together. There are two possible ways to do this: one is that the old leader picks up where he left off, seeking out his old friends and convincing 'em to join up with him again. But just as often, the old leader isn't available — may be dead, or may have retired, or may have simply disappeared. Or maybe he's just not interested at all. (In that case, he's the first one they visit, only to get turned away, but he'll probably show up anyway just when the rest of the crew has been gathered, or later, in the nick of time to save the day.) Anyway, if it's a former minor character who's gathering the band, that means that he or she will probably be the new leader.

Either way, various things will happen during this episode. A member may be reluctant, and require our heroes to jump through hoops to get him on board. Several may be working jobs that are oddly appropriate, or ironically inappropriate, to their former role. Extra characterisation will occur by showing what kind of activities are taking up their free time, or what kind of family they've started. A former big-shot is likely to have become completely washed-up, turned into a drunk and/or bum, and the heroes will have to revitalize his burning spirit to bring him back to his old glory.

Compare with Avengers Assemble, Everyone Meets Everyone and Order Reborn. Sister trope to Split and Reunion.

After years of separation after Maligula's reign of terror, Raz manages to reunite them in order to stop Maligula from ever coming back.

After years of separation after Maligula's reign of terror, Raz manages to reunite them in order to stop Maligula from ever coming back.