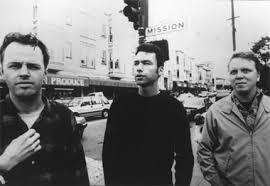 They will give you nightmares for a week. From left to right: Adam Pfahler, Blake Schwarzenbach, Chris Bauermeister.
Advertisement:

Jawbreaker is an American Punk Rock band active from 1986–96 and 2017 onwards. They're considered to be one of the most influential acts of the 1990s emo movement. Lead vocalist/guitarist Blake Schwarzenbach, bassist Chris Bauermeister, and drummer Adam Pfahler formed the band while students at New York University in 1986. They later moved to Los Angeles, where they released their debut album Unfun in 1990. After moving yet again across California to San Francisco in 1991, they released Bivouac the next year.

Blake's charisma and personal, frustrated lyrics helped make him a cult idol, even when undergoing surgery to remove painful, voice-threatening polyps from his throat. They toured alongside Nirvana in 1993, then released 24 Hour Revenge Therapy in 1994, which promptly attracted the attention of a few major labels. They signed a $1 million contract with DGC Records and released Dear You in 1995, but its polished production and smooth vocals garnered significant backlash at the time. Internal tensions led to the band's break-up in 1996. For the most part, everyone went their separate ways for the next 21 years, while staying busy with various projects.

Adam has re-released (and sometimes, remastered) the band's studio albums through his label Blackball Records; he has also played in a few other bands, such as J Church and Whysall Lane.note He released Live 4/30/96 in 1999, and Etc. in 2002 through said label. Chris went back to the toy store he worked at before Jawbreaker had started touring, but eventually started playing music again. Blake started a new project called Jets to Brazil in 1997; however, audiences didn't really warm up to them, and they disbanded in 2003. He also played in the Thorns of Life (2008–09) and Forgetters (2009–13).

Before finally reuniting, there were rumors that would be constantly shot down. Adam said that he "would do it in a heartbeat"; Chris agreed that "Adam and I would do it at the drop of a hat. But I don't think Blake is anywhere near [ready]." Blake, for his part, said "If I felt I was in a good enough place, I think we could have a really fun and successful tour. We could also pay a lot of bills, which would be profoundly helpful. But it's always the same story. Something is fucking broken in me so that when it's like, 'A lot of people want to hear you,' I just think, 'Well, I don't want to do that.'" He also commented that "I have said this many times before: I physically don't feel capable of doing it. I don't think I could sing those songs and I think it would be a disservice to the memory of the band to try to do that. I don't gloat about being in that position, either. It's not like, 'Oh, I get to take the moral high ground.' In fact, I'm sad about that." However, in May 2016, Adam revealed they'd rehearsed a few songs together and were very excited about possibly reuniting; he said "We played a couple of songs just to see if we could still do it. We weren't sure if we could still do it. We could still do it." They reunited on April 9, 2017. Fast forward a few months later, they headlined Riot Fest in Chicago on September 17, 2017.

Shield your tropes from all this misery: