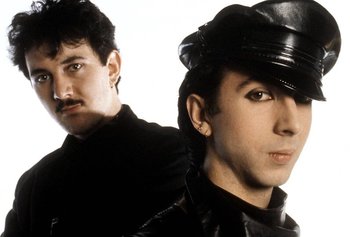 Left to right: Dave Ball and Marc Almond
"Sometimes I feel I've got to—
Run away, I've got to—
Get away from the pain you drive into the heart of me."
— "Tainted Love"
Advertisement:

Consisting of Marc Almond (vocals) and Dave Ball (keyboards), Soft Cell were an English synthpop duo who rose to prominence in 1981 with their cover of Gloria Jones' song "Tainted Love". While their first album Non-Stop Erotic Cabaret was a success (ranked at #5 on the UK charts), the duo only lasted three more years, releasing three more albums in that time. However, the breakup was amiable, and the duo reformed in 2001, went on tour together and released one more album in 2002. Since then, they have released several compilation albums (mostly consisting of previously-unreleased songs) and a remix album. Marc Almond has also had a fairly high profile solo career including a number one hit in collaboration with Gene Pitney, "Something's Gotten Hold of My Heart". The band played what is widely believed to be their farewell concert "Say Hello/Wave Goodbye" at the London O2 on the 30th of September 2018 though they have not officially broken up permanently; as of 2019 they are working on a new album but do not plan to do large-scale tours.