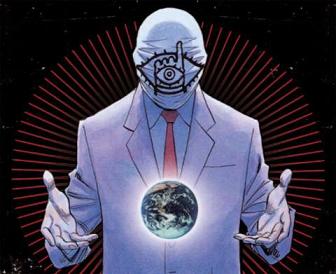 20th Century Boys is a manga series created by Naoki Urasawa, the mastermind behind Monster. The manga was originally serialized from 1999 to 2006 in the seinen magazine Big Comic Spirits; it was followed by a sequel, 21st Century Boys, which ran from January to July in 2007. The plot of the manga spans several decades, from the 1960s to the 21st century, and involves a large cast of characters and several plot twists along the way.

It's the year 1997, and Kenji Endou's life is going to change forever. As a youth, Kenji harbored dreams of becoming a rock star; now, however, he's stuck working in his late father's convenience store (formerly liquor store). On top of that, his older sister has disappeared and has left Kenji to take care of her infant daughter.

One day, Kenji learns that a childhood friend of his, nicknamed Donkey, has committed suicide by jumping off a roof. Shortly after the wake, Kenji receives a belated letter from Donkey, including a drawing of a strange yet familiar symbol and the question "Do you remember this symbol?" along with a request to get together some time.

The letter convinces Kenji that Donkey's suicide was, in fact, a murder. In his efforts to unravel the mystery behind his old friend's death, Kenji learns of a man known only as Friend who is the founder of a very popular cult. A cult that uses the symbol shown in Donkey's letter, a symbol that was in fact used by Kenji and his friends back when they were kids.

During their childhood, Kenji and his friends played a game in which they imagined the world being destroyed by a group of villains. Now, Kenji must gather his friends again, in order to prevent Friend, the man who took their symbol, from turning their childhood fantasies into a horrible reality.

Adapted into a live-action film trilogy that is among the most expensive Japanese film projects in history. The films are very faithful to the manga (until the end, at least), which has inevitably led to criticism that they're impossible to follow if you haven't read it, due to time constraints forcing some important characters into smaller roles. Rather surprisingly, an Animated Adaptation of the series was never planned.