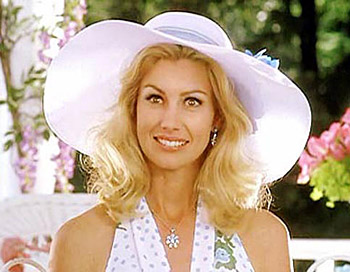 OK, you can stop smiling now... Please?
"He always smiled, and he always chuckled, but inside he did not notice anyone, did not care; it was his body that smiled, nodded and shook hands. Nothing touched his mind, which remained remote."
— Philip K. Dick, Ubik
Advertisement:

Everyone loves Alice! Who wouldn't? She's practically perfect in every way. She's bright, chipper, and pleasant under all circumstances. You've never seen her annoyed, let alone angry. She always has a kind word for anyone, and she treats everyone like her best friend.

Of course, it's all just an act.

The Stepford Smiler is a dark twist on the Purity Sue — a character obsessed with projecting an image of wholesome happiness in order to be accepted. Tragically enough, they'd probably accept her for who she is regardless of her self-imposed Masquerade. Her flawlessly crafted facade hides a real person that's usually breaking like so much fine china, in order to keep up the deception.

These are the three main types of Stepford Smiler:

Depressed Heroines or show co-stars that are Stepford Smilers can either be played straight, or played to gain viewer sympathy as they struggle to live up to their own impossible ideals. Villainesses like the Evil Matriarch who are Stepford Smilers are usually played one of two ways: it can either humanize them, much like the heroine, or it can accentuate their evil by contrasting it with their soullessness. Feminine pronouns are used throughout this trope because the Stepford Smiler is a traditionally female role, though there are many male examples too. Sometimes, they're even a couple.

The Empty's mask itself can also hide a terrible secret... there is nothing behind it. The void is either a result of using up so much energy pretending to be normal that nothing is left over, or because there was nothing there to begin with. The trope-naming Stepford Wives fall into this second category, naturally.

Scared yet? It gets worse.

There is a very good chance that she is dosed up on prescription tranquilizers or antidepressants (Valium, Xanax, and/or Prozac are staple favorites)—or good old fashioned over-the-counter alcohol—often to the point of dependence. With or without drugs, if a Stepford Smiler smiles long enough without cracking, she can become the mask and turn Unstable. Some Stepford Smilers buy into the dead Barbie smiles to such a degree that they care for nothing other than maintaining appearances, having money, making sure their hair is just right, and improving their social standing, all of which are pursued with equally Social Darwinistic means. Essentially, they become the materialist equivalent of the Nietzsche Wannabe. Unstable characters sometimes have another kind of smile behind the fake one.

Not every Housewife is a Stepford Smiler, obviously. They often encounter one as a nemesis instead, in a post-High School example of the Alpha Bitch.

Science does add some credence to the trope, as those who default to a half-smile expression tend to report a generally better mood, regardless of any outside factor. However, this does not extend to a full on fake demi-Slasher Smile, suggesting that even the person's brain chemistry isn't fooled by the facade.

The Stepford Smiler gets her name (as does the Stepford Suburbia in which she lives) from the book and later movies The Stepford Wives, about a village whose men conspire to create the Barbie perfect wife, all with similar eerie smiles.

Contrast with the Straw Nihilist, The Stoic, The Pollyanna, Yamato Nadeshiko, Drama Queen.

Compare/Contrast with The Snark Knight (whose demeanor is typically the inverse of the Stepford Smiler), Stepford Snarker (whose motives are the same, but whose mask is made of snark rather than smiles) and Obviously Not Fine (if someone is trying to be a Stepford Smiler, but their sadness is all over their face).

When confronted by Riko, Chika tries to maintain an upbeat tone, but her stress and anxiety soon catches up when she cracks and states how frustrating it is to not get a single vote in their Love Live performance.

When confronted by Riko, Chika tries to maintain an upbeat tone, but her stress and anxiety soon catches up when she cracks and states how frustrating it is to not get a single vote in their Love Live performance.