Webcomic / Satan and Me 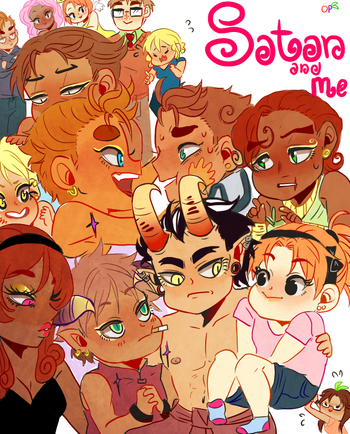 The gang's all here!
Advertisement:

A screw-up in a feminine hygiene factory leads to a girl accidentally summoning Satan with her period. Now Satan is stuck tending to the whims of Natalie McAllister, a religious high schooler who soon enough finds herself feeling a little bit of sympathy for the devil. Hilarity Ensues, naturally.

Satan and Me follows the exploits of Natalie, Satan, and...er... "friends", including a colorful cast of mostly biblical characters with some liberties taken here and there, though more recently it's more focused on drama-filled plot arcs than the day-to-day shenanigans of a teenage girl with control over the devil himself or trying to keep him hidden.

Satan and Me was based on this post on tumblr

and written and drawn by Orangeplum.