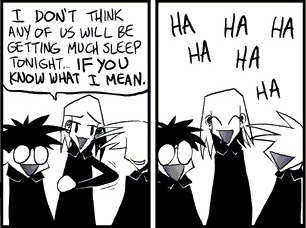 It's good as long as no one explains the joke. note 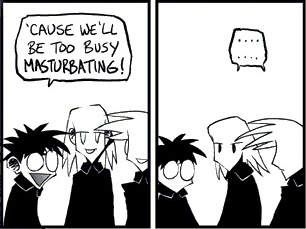 …damn it.
"Your wife. Is she a… a goer? Eh? Know what I mean?"
— Arthur Nudge, Monty Python's Flying Circus

A character, after delivering a Double Entendre, adds a remark to their statement to ensure that the audience spots the hidden meaning. Alternatively, after hearing somebody else deliver a double entendre, appends it for them to much the same effect.

Typical phrases used for this purpose include:

See also Don't Explain the Joke. If the person didn't mean to make a double entendre but realizes it, they may say That Came Out Wrong. Has a distinct familiarity with Does This Remind You of Anything? and Intercourse with You. If the person being talked to still doesn't get it, see Entendre Failure. Compare Heh Heh, You Said "X".

NOTE: This trope is about pointing out a Double Entendre. If you find a double entendre sinkholed to this article or one of its former titles, remove the sinkhole.

Use Euphemism Buster for when the Double Entendre is made clear.