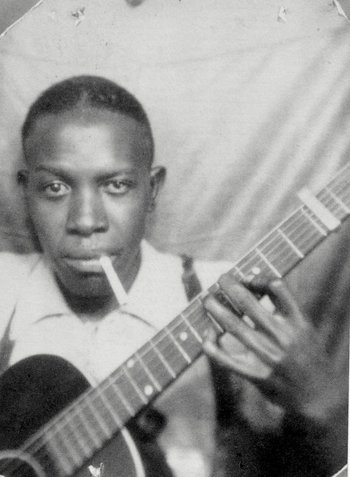 One of two verified photographs of the bluesman.
Advertisement:

Robert Leroy Johnson (8 May 1911 - 16 August 1938) was an American musician who had an enormous influence on the Blues genre. Sure, there was blues music before Robert Johnson, but it sounded vastly different from the blues as we know it today; Johnson either invented or popularised many of the genre's most important conventions.

As may be gathered from his years of birth and death above, he only lived to be 27. Over his lifetime only a handful of songs were ever recorded, but each and every one of them is influential. A "Zeroth Law of Blues Standards", analogous to The Zeroth Law of Trope Examples, may be formulated: if you trace any blues standardnote a well-known blues song which has been covered by a lot of artists back far enough, odds are good—perhaps not as good as the odds for finding Shakespeare in The Zeroth Law of Trope Examples, but still ridiculously good for one single artist—that you will find Robert Johnson. Some of his best-known (and most-covered) songs are "Dust My Broom", "Cross Road Blues", "Come on in My Kitchen" and "Sweet Home Chicago".

Much of his life is Shrouded in Myth. When he was first rediscovered in the 1960's after the release of the compilation album King of the Delta Blues Singers, many things about the man himself were completely unknown. Since then, thanks to the research of scholars like Elijah Wald, his life and career have been pieced together fairly well. He went through the usual childhood that an African-American in the South went through in the Jim Crow era, though, contrary to the image of him as a Mississippi backwoods figure, he spent a fair amount of his youth in Memphis. He was married and his wife died a few months later. To make ends meet during The Great Depression, he became a traveling musician, performing in cafés and other venues throughout the region. Signed to a contract by the American Record Company, he recorded 29 songs over two different sessions held in Texas (one in a San Antonio hotel suite, one in a Dallas warehouse), with alternate takes bringing his total preserved output to 42 tracks. All but one of these pieces were assembled in 1990 on the Grammy-winning The Complete Recordings, with the 42nd, an alternate take of "Travelling Riverside Blues," coming out on a reissue of King of the Delta Blues Singers in 1998. (According to scholar Tom Graves, Johnson recorded 59 tracks in his known sessions, but 17 of these remain lost to history).

There's also a legend about him, which says that he used to be a terrible guitarist and he somehow got better overnight, because he made a Deal with the Devil, meeting him At the Crossroads. The truth is thought to be far more mundane: Robert was unemployed, owned a guitar and loved the blues, and with nothing to do but practice all the time, he simply got really good really fast. In truth, Johnson never made any claim that he had gotten his powers from the devil other than jokingly. Some people just took his joke too seriously.

The most commonly accepted version of his death comes from his close friend and "chitlin circuit" touring partner Sonny Boy Williamson II, who stated that Robert was flirting with the wife of the man who owned the venue where they were performing. The owner supposedly sent Robert an open bottle of whiskey that Sonny Boy prevented him from drinking, saying "Man, don't never drink from an open bottle. You don't know what could be in it." Robert is said to have retorted "Man, don't ever knock a bottle out of my hand." A second bottle was sent over, and Robert began drinking it. He became seriously ill soon afterwards and was bedridden for three days in severe pain before finally dying on August 16, 1938. Researchers have confirmed the basics of this account, suggesting that the husband only spiked the drink with the intent to scare Johnson, but the drug ended up aggravating an ulcer that Johnson had recently been diagnosed with.

He thereby became one of the first of many notable musicians to die at the age of 27. Some people believe this is a curse, as Brian Jones, Jimi Hendrix, Janis Joplin, Jim Morrison, Kurt Cobain and Amy Winehouse (among others) all died at that age.

He was a damn good guitarist. Let's just say you could think of him as a one man doing a 5 piece band's job. He played rhythm guitar, with a melody strummed on top, a bass line following along on bottom, while tapping his foot (that would be the drummer), and singing ALL AT THE SAME TIME! When Keith Richards first heard a recording of Johnson, he asked who was playing the "excellent bassline." When playing a Johnson song a guitarist will often struggle just to play his music. So, if you're up to the challenge, good luck!

.* Non-Appearing Title: Or subtitle. "Preaching Blues (Up Jumped the Devil)" says absolutely nothing about the Devil or his jumping up.