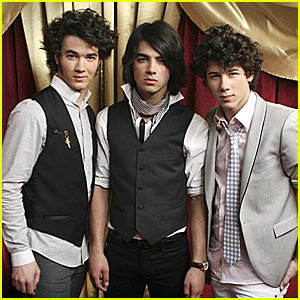 The Jonas Brothers (2005-13, 2019-) is a pop rock band discovered by Disney (but, contrary to popular belief, not manufactured by them...at least not initially), consisting of members/brothers Joe, Nick, and Kevin note actually Paul; Kevin is his middle name Jonas, with other spots in the music filled by studio musicians or tape decks.

The entire band began through Nick, who was the first to pursue a musical career around the age of 10. After his song "Joy to the World (A Christmas Prayer)" blew up, his brothers began following in his footsteps, and the rest is history.

They toured independently as a Christian Rock-slanted band with their father as their manager before getting signed to Columbia Records in 2005 and releasing their first album, It's About Time, which was not widely recognized. In the fall of 2006, after getting dropped from Columbia, they were signed by Hollywood Records and absorbed by the Disney Corporation, elevating them to some of the most popular Teen Idols of the late 2000s.

Between Late 2010 and 2011, the band went on a hiatus to pursue solo projects before reconvening in 2012 to begin work on a fifth album that was subsequently cancelled in 2013 after they broke up

due to Creative Differences. However, they shocked the world on February 28, 2019 with the announcement that not only had they reunited, but would release their first single in six years, "Sucker". Three months later, they released Happiness Begins, their first album in almost exactly 10 years (five days early of the anniversary date).

They starred in Camp Rock (a Disney TV film) as well as its sequel and had their own TV series, Jonas. Kevin had a show with his wife Danielle, Married to Jonas, while Nick had a recurring role on NBC's Smash. They have also appeared on the American Music Awards, American Idol, and Dancing with the Stars.

As for the members' solo work:

Tropes present in their music, music videos and performances: