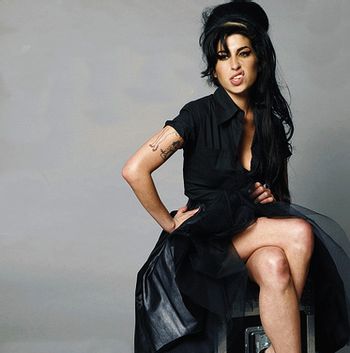 "I've come to the realization that life is short, you know, gotta live in the moment, you've got to seize the day."
Advertisement:

Amy Jade Winehouse (September 14, 1983 – July 23, 2011) was a Soul/R&B/Jazz singer and songwriter, active from 2000 to 2011. Her two albums, Frank and Back to Black, both received critical acclaim, and Back to Black won five Grammys, making Winehouse the first ever British artist to win that many. She also won a number of other prestigious awards throughout her career, including 3 Ivor Novello awards, a Mobo award, a world music award, a Q music award, an MTV Europe Music Award, and a Brit award. Both of her albums spun off several hit singles; she had 15 charted singles in total throughout her career spanning only nine years, including many covers and collaborations with artists such as Tony Bennett and Quincy Jones. Back to Black would eventually become the best selling album of the '00s and the entire 21st century in the United Kingdom, but also enjoyed considerable mainstream success abroad, including all over Europe, Australia, New Zealand, Brazil, Japan, and America.

Winehouse would go on to influence many subsequent female singers of the 00's with the likes of Adele, Jessie J, Paloma Faith, Duffy, Florence Welch, Emeli Sandé, Lana Del Rey, and Lady Gaga citing her as a big influence as well as a reason for their success. She is credited by many as an influence in the rise of popularity of the eccentric female singer-songwriter all over the world as well as revitalising soul music and the stagnated British music scene, and also for kicking off a third British Invasion.

In the later years of her life, she attempted to launch the career of her goddaughter Dionne Bromfield, whom she was also a mentor and best friend of.

She also had a myriad of personal problems, however, including alcoholism, drug abuse and depression, which made her a tabloid magnet and ruined her marriage. She was working on a third album when she was found dead in her London flat

Following her death, her father set up a charity called The Amy Winehouse Foundation in her honour, to help those affected with alcoholism and other drug addictions around the world.

Her story is told in the 2015 Rockumentary Amy.