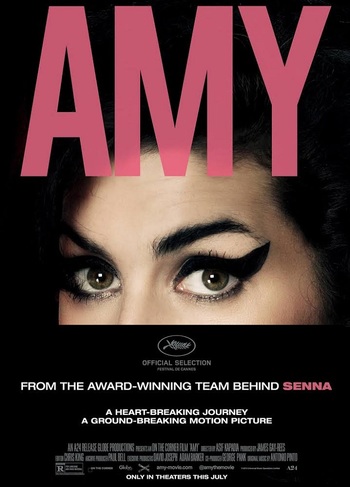 Amy is a 2015 documentary film directed by Asif Kapadia, about the short life and tragic death of British singer Amy Winehouse (1983-2011).

The film eschews some common documentary tropes like a Narrator or Talking Heads. Instead the entire film consists of stock footage clips of Winehouse—interviews, performances, and home movies. The footage is accompanied by commentary from Winehouse herself from old interviews, as well as voiceover commentary from her friends, business associates, and family members. The upward arc shows Winehouse's raw talent as a singer and songwriter making her a big star on the British music scene, with her first album Frank being a major hit. Depression and alcoholism start to affect Amy badly even as she becomes an international superstar with her second album Back to Black. Her unhappy relationship with husband Blake Fielder-Civil is portrayed as one negative turning point, with her refusal to go to rehab because her father advised her not to, another one. Winehouse's substance abuse eventually leads to her death by alcohol poisoning in 2011.

Not to be confused with the 1998 Australian film, Amy, or the video game, Amy.