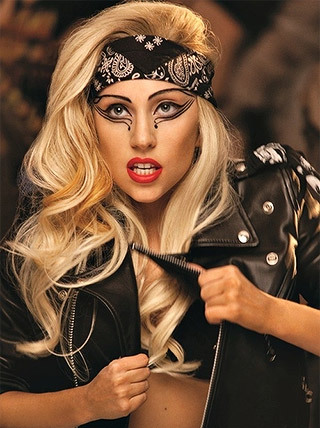 She's on the edge of glory.
Influences:
Advertisement:
"When I look back on my life, it's not that I don't want to see things exactly as they happened; it's just that I prefer to remember them in an artistic way. And, truthfully, the lie of it all is much more honest because I invented it."
— "Marry the Night: The Prelude Pathétique"

Stefani Joanne Angelina Germanotta (born March 28, 1986), better known as Lady Gaga, is an American dance-pop singer, songwriter, pianist, actor, and civil rights activist who burst onto the music scene in 2008 and since then has become known for her catchy songs, suggestive lyrics, outrageous outfits, niceness, and (more recently) insane vocal ability. She is also bisexual, having been active supporting LGBT+ rights causes, among other issues.

Her music is influenced by the likes of Britney Spears, Madonna, Amy Winehouse, Prince and Cyndi Lauper, as well as glam-rock artists like David Bowie and Queen, and the Europop genre of the 1990s. Gaga spent years trying to make it big, writing for other artists such as Fergie, The Pussycat Dolls and New Kids on the Block and Britney Spears while working toward her own big break. She also took part in her university talent contest, attracting rave reviews from the judges, and released a little-known album with a band she was singing with (as Stefani Germanotta).

Okay, that doesn't cover half of it.

Lady Gaga is, quite simply, the poster girl for over-the-top eccentricity. Between her outrageous outfits, her role-play crossdressing, her incredibly trippy music videos and performances, and her camp sensibilities, Lady Gaga is easily one of the most... interesting pop stars working today, as this page will show you very clearly.

Her critics like to point out that the entire point of Lady Gaga is her odd behavior and strange mode of dress, noting that without these elements of her stage persona, she never would have become as popular as she is today.

The music video for "Bad Romance" is among the most viewed videos on YouTube. It has surpassed 500 million views, with a huge chunk coming from fans embedding the video everywhere they can and refreshing the page often. If your computer (or proxy

) is within one of the allowed regions, you can watch it here

In 2011, Gaga's song "Born This Way" became the 1000th song to be identified as the #1 single in America by Billboard magazine since the establishment of the Hot 100 chart.

Lady Gaga appeared as herself on the season 23 finale of The Simpsons ("Lisa Goes Gaga") in which she helps Lisa Simpson (and the rest of Springfield) with their low self-esteem.

She also seems to be growing as a force to be reckoned with in the acting field, currently starring as Countess Elizabeth (inspired by Elizabeth Báthory) in American Horror Story: Hotel. With the role of Ally in the 2018 remake of A Star is Born, she earned a nomination for Best Actress at the Academy Awards. Her performance in House of Gucci was also widely praised, with many saying she was snubbed of another Academy Award nomination.

Since Cheek to Cheek, she committed to making her image much, much Lighter and Softer. Her breakthrough in cinema as Ally and her worldwide hit duet with Bradley Cooper "Shallow" from the A Star is Born soundtrack are probably her most successful efforts regarding this change in her public image. The public has pretty much universally learned that Beneath the Mask, Lady Gaga is perhaps — gasp — a normal person (relatively speaking), just like any of us. However, with the release of Chromatica in 2020, she returned to the campy dance-pop that made her famous.

Gaga also appears as "Zomby Gaga" in Monster High in a partnership with the franchise for the Born This Way Foundation.

Her Songs & Style as a Creator:

Tropes used in Alejandro include:

Born This Way
Judas
You And I
Marry The Night
G.U.Y. - An ARTPOP Film
911 (contains spoilers)
"Can't read my, can't read my
No he can't read my troper face
She's got me like nobody~"
Feedback