Film / The Color of Pomegranates 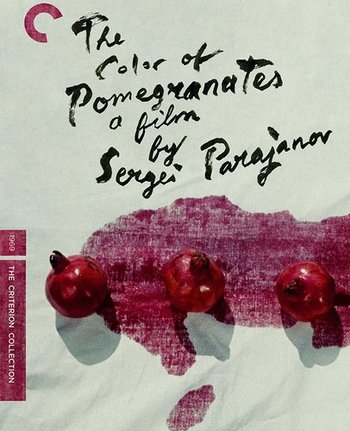 The Color of Pomegranates (Armenian: Նռան գույնը), originally titled Sayat Nova, is a 1969 Soviet film written and directed by Sergei Parajanov. It was made in celebration of 18th century Armenian singer and poet Sayat Nova's 250th birthday, and is an artistic depiction of his life.
Advertisement:

It is a biography of Sayat-Nova (King of Song) that attempts to show his life visually and poetically rather than literally. The film has little dialogue but an abundance of music and poetry, and divides Sayat Nova's life into thematic chapters: Childhood, Youth, Prince's Court, The Monastery, The Dream, Old Age, The Angel of Death and Death. There are sounds and music and occasional singing but dialogue is rare.

Lady Gaga’s music video for “911” was heavily influenced by the film and references its imagery.