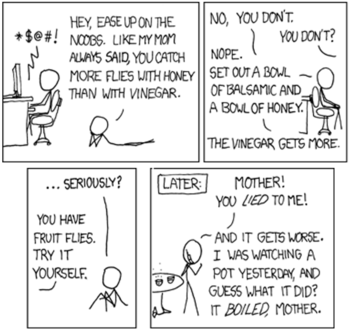 Cueball learns the truth about this fallacy the hard way.
"My momma always said life was like a box of chocolates. You never know what you're gonna get."
— Forrest Gump in an example of his catchphrase
Advertisement:

Most societies place a certain moral value on respecting and listening to one's elders, especially one's parents. Mother knows best, after all! So, very often, when characters find themselves in difficult situations, they will think back to the advice their mother or father (or grandparent, or aunt/uncle) once gave them, and pass it along to their companions.

This can be accomplished with the Stock Phrase "Mama said ..." or "Like my daddy always told me ...", or through a Meaningful Echo of something we've heard the relative say, now adopted by the child. Another common variation is for a character to share a cure or food recipe or secret technique they say has been passed down from their family.

This is a milder sub-trope of Appeal to Authority, as there is something about saying a bit of advice came from your parent that lends it more weight than if it were just something you'd heard—regardless of whether it's actually good advice.

Often the advice is a piece of Proverbial Wisdom. May devolve into Hurricane of Aphorisms or Quote-to-Quote Combat.

In fiction, this stock phrase has long been a Dead Horse Trope, lending itself more to parody than to straight examples, but it is still quite common as a lyric trope, especially in pop and blues.

Sister Trope to You Know Who Said That?. The original giver of the advice may have been a Good Parent who earned their child's respect or a Knight Templar Parent who drilled some maxim into the child's head; as such it may be an application of the commandment to Honor Thy Parent. Taking the forbears' wisdom to the level of religion is Ancestor Veneration. May overlap with Deceased Parents Are the Best, but the adviser is not necessarily dead, just off screen or status unknown. Sometimes part of Let Me Tell You a Story. Compare Quoting Myself.