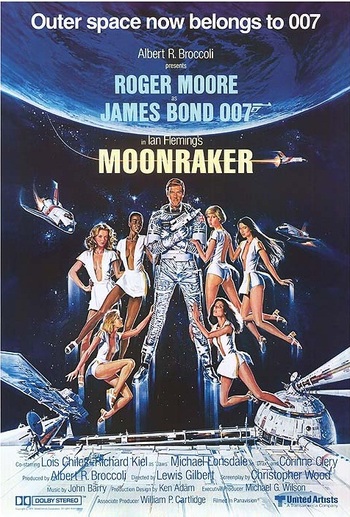 Wheeeeeere are you, why do you hiiiiiide...
"James Bond. You appear with the tedious inevitability of an unloved season."
— Hugo Drax
Advertisement:

The One where Bond gets launched INTO SPACE.

Moonraker is the eleventh James Bond film by Eon Productions, the third and last to be directed by Lewis Gilbert and the fourth starring Roger Moore, coming out on June 26, 1979. The Title Theme Tune was performed by Shirley Bassey, for the third and last time.

James Bond is sent to investigate the aerospace industries of magnate Hugo Drax after one of their space shuttles is hijacked mid-transit. Turns out it's all part of an Evil Plan by Drax who, like Blofeld and Stromberg before him, is tired of sharing the world with all those riff-raff. To remedy this, Drax plans to exterminate the world population from the safety of his space station and replace it with "ideal" supermodel specimens. So much for champagne wishes and caviar dreams.

Originally, the film following The Spy Who Loved Me would have been For Your Eyes Only, and this was even announced in the final credits of that film. However, after the unexpected and gigantic success of Star Wars less than two months before the release of The Spy Who Loved Me, the producers quickly changed their minds and decided to adapt Moonraker. Because they found the original story by Ian Fleming too mundane, the filmmakers took only the name of the villain, Hugo Drax, and nothing else. Jaws returns as the only henchman to make a second appearance in the series, but his "vicious killer" role disappears.

The laser gun shown in the film and its infinite ammo is unlockable it as a cheat in the N64 game GoldenEye (in which the Aztec bonus level is based on this film). The film also got the 2010 GoldenEye video game treatment as one of the segments of 007 Legends, as in reimagined with Daniel Craig's Bond.

Notable for being the final Bond film to feature Bernard Lee as M, who was suffering from stomach cancer during filming. By the time production started on For Your Eyes Only he was too ill to participate, being in the terminal stage, and he died shortly before filming wrapped. This was also the last Bond film with sets by production designer Ken Adam.

Holly Goodhead: Take me 'round the world one more time.
James Bond: Why not?

M asks Moneypenny if Bond's back from a mission in Africa. Roger Moore's previous film was The Wild Geese, which largely took place in South Africa.

M asks Moneypenny if Bond's back from a mission in Africa. Roger Moore's previous film was The Wild Geese, which largely took place in South Africa.