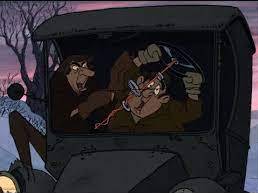 When I said "Take the Wheel", I didn't mean...
Advertisement:

A gag in comedies involving driving has the driver removing the steering wheel (or handlebars) by accidentally or intentionally letting someone Take the Wheel. Often this means the vehicle will go out of control or become inoperable, though there are instances where reinserting the wheel (whether in its original place or otherwise) will allow regained control.

Often happens with The Alleged Car.