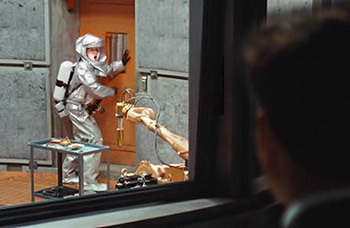 Let me out!
Advertisement:

So the Big Bad and his minions have stormed the secret laboratory and captured the MacGuffin. But we really need to show the audience what is at stake here without having the villain pass through the Moral Event Horizon. So one of the Mooks will be fumbling around with a vial of the stuff, it will fall to the floor, shatter, and everybody except said Mook will escape in time. The door will seal, and the Mook is left to his horrible fate as the rest of his compatriots look on sympathetically. He has been Trapped in Containment.

It needn't be a chemical weapon — it could be as simple as someone trapped behind a door as it fills up with water — although it usually is.

Note the odds are 99% that someone will attempt an Indy Hat Roll. Naturally, this trope doesn't count for those who succeed.