Series / Look Around You 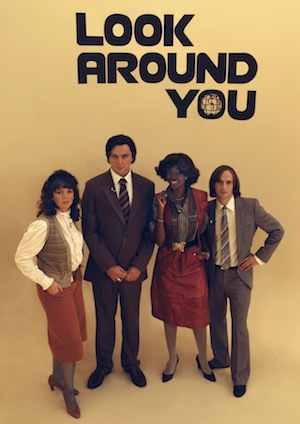 This British comedy series, which originally aired on BBC Two from 2002–05, is an Affectionate Parody of educational programming such as Television for Schools in series 1, and later a Mockumentary in the style of Tomorrow's World. The series mimics perfectly the style of British programming in the 1970s, right down to using authentic period cameras and effects. The "science" seen in the series bears no resemblance whatsoever to that of the real world (mixing sulphur with champagne gives sulphagne, and it gives you powerful Eye Beams if you drink it; passing nitrogen gas through mains water produces whisky, and iron was invented in the 18th century by a cyclops named "Lord Iron de Haviland"), but, nevertheless, the spot-on parodies of educational programming and "almost-correct" science means the writers have Shown Their Work.

. However, they've hidden ''Look Around You'' episodes with it. Can you guess which ones are which?

The second series was almost a total change from the first — the 10 minute episodes became 30, the action moved from lab to studio, and the faceless voiceover was replaced by presenters delivering parodic Witty Banter.

After 8 unbearable years of No Export for You, as of July 20th, 2010, the BBC have finally released a Region 1 DVD set of the first series.

Have you worked out what we're looking for? Correct, the answer is: tropes!