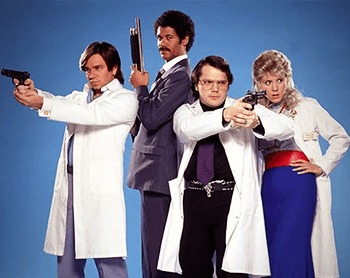 Be very, very afraid.
"I'm Garth Marenghi: author, dreamweaver, visionary, plus actor. You are about to enter the world of my imagination; you are now entering my darkplace."
Advertisement:

In the mid 1980s, prolific horror writer Garth Marenghi created a television series so horrifying that it was not until 2004 that it was deemed safe for general release to the British public. The show focuses on Darkplace Hospital in Romford, East London, which is apparently built over the very Gates of Hell. To be more accurate, the show is about Dr. Rick Dagless, M.D (played by Marenghi himself), who is the best doctor in the world ever, as well as a crack shot, action hero, and master warlock. Dr. Rick Dagless, M.D. and (to a lesser extent) his friends and co-workers are the only hope the planet has against the various evils that rise up in Darkplace Hospital, including mutant eye-babies, angry telekinetic women, and of course, Scotsmen.

... okay, so that's not actually true. Garth Marenghi's Darkplace is a straight-faced spoof of B-Movie horror works and the whole idea of the Cult Classic. It's a rare example of an entire show deliberately composed of Stylistic Suck tropes, featuring terrible acting and dialogue, cheesy plots with Anvilicious and dubious morals (including Attack of the Killer Whatever), many a Special Effect Failure, and atrocious camerawork, editing, and audio mixing. Along with the "original footage", each episode is accompanied by present-day interviews with the fictional Garth Marenghi and his co-stars, who cluelessly praise the Show Within a Show as ahead of its time, and offer insights into its production and (rather warped) meaning.

In the UK the series ran on Channel Four. In America, the series first ran on the Sci-Fi Channel, then moved to Adult Swim. Currently can be seen on Prime Video.

See also Man to Man with Dean Learner, a spin-off, and Snuff Box, on which many of the same actors have appeared.

Many tropes that get misused get misused here, and to slightly over the top, comic effect. Tropes used include:

Before beginning a tale of evil spore that turn people into broccoli, here's an 80's music video!

Before beginning a tale of evil spore that turn people into broccoli, here's an 80's music video!