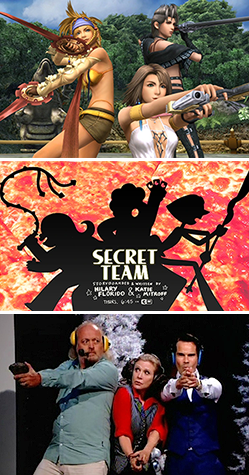 When a team, generally young women, pose in a distinctive style in the midst of battle. It looks pretty good on camera and it conveys teamwork. The general appearance is usually dependent on a symmetrical three person shape, the two on the outside have their body positions turned away from the center person. A silhouette is optional. But there is also a two-person variation of them standing back to back. Often done in a montage.

No actual firearms are (usually) involved though.

Originated by the famous poses of Charlie's Angels.

It is often used as a Stock Parody. Compare the "Super Sentai" Stance and Back-to-Back Badasses.