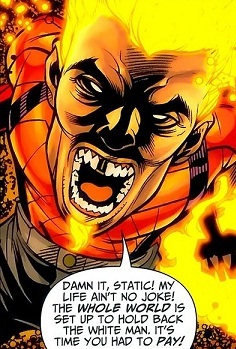 Gareth: Yeah, I work hard, I earn my keep. But unfortunately, the history books are full of just people who toil and fight for worthy causes and the freedom of others.
Tim: That's the most profound thing you've ever said, mate.
Gareth: And you do all that, only for foreigners or women or the disableds to take advantage of it.
Tim: Yeah. Could I withdraw my last comment?
—The Office (UK)
Advertisement:

A Stereotype Flip in which a white person (usually a man, as the title suggests) sees himself as a victim of injustice or unkind behaviour at the hands of minorities or turncoat whites. (Note: this is not a judgement of the value of the trope, merely a statement that it has been used many times in fiction and a list of the examples thereof.)

The type first appeared in large numbers in the mid-1960s, when "affirmative action" became official government hiring policy. This meant that a white person could experience "discrimination" by being turned down for a job in favour of a member of a minority group, since the place of employment had quotas to fill and there already existed a proportionate number of whites. Now that affirmative action has been reformed so that economic status is taken into account as well as race, it isn't much of a controversy anymore — so the ire of the Angry White Man has shifted to less tangible targets.

He's frequently exasperated by what he sees as overly generous attempts to incorporate minorities into the modern American cultural fabric (or not-so-modern, for that matter) at his expense; media stereotypes of whites as stupid, unfashionable, and/or "un-ethnic"; the supposed scapegoating of white people for everything that goes wrong in the world; or occasionally just the general feeling that he soon might be the Last of His Kind. In more extreme cases, the very thought of homosexuals, women, and ethnic groups enjoying the same comforts as him is enough to make him cry oppression.

Will as often as not be played for comedy. If not... watch out!

Taken seriously, it is usually the result of some combination of (real or perceived) Flawless Token, White Guilt, and Persecution Flip. If he ever comes into money, he'll most likely be a Bourgeois Bumpkin. The Right-Wing Militia Fanatic is the militant version of the trope.

Figuratively, the character doesn't have to be white, or a man. The trope can apply to any type of supposedly privileged character who is constantly railing against supposed discrimination against them.

The original prototype was probably Archie Bunker of All in the Family — although, in fact, he was a lot less angry than many of his successors.