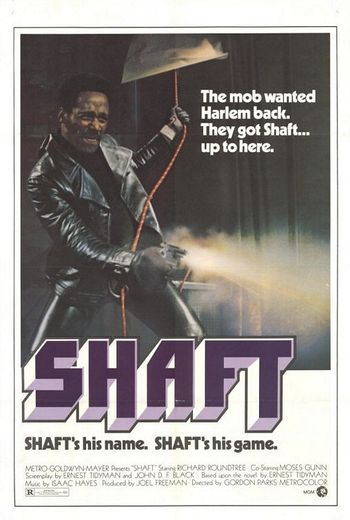 "Can you dig it?"
"They say this cat Shaft is a bad mother--
SHUT YOUR MOUTH!
But I'm talkin' 'bout Shaft.
THEN WE CAN DIG IT!"
Advertisement:

Shaft is a 1971 Blaxploitation film directed by Gordon Parks and written by Ernest Tidyman, based on Tidyman's novel of the same name.

It tells the story of John Shaft (Richard Roundtree), a tough African-American private detective who travels through Harlem and infiltrates The Mafia in order to find the missing daughter of a black mobster. Also in the cast are Moses Gunn as Bumpy Jonas, Charles Cioffi as Lt. Vic Androzzi, and Christopher St. John as Ben Buford, along with Gwenn Mitchell and Lawrence Pressman. Isaac Hayes did the theme song quoted above, which has reached Memetic Mutation to the point where it may actually be better known than the movie. It also earned Hayes the "Best Original Song" Oscar, the first ever awarded to a Black musician.

The film was followed by two sequels — only the first of which was based on a Tidyman novel and directed by Parks — along with a series of made-for-TV movies following the further adventures of Shaft during the 1973–74 season of The New CBS Tuesday Night Movies. As the series was being aired on network television, the character of Shaft was toned down a fair amount; for example, he frequently worked with the police, instead of being against them as in the original movie. Due to this Executive Meddling, the series was unpopular, and it was quickly cancelled.

Two spinoff / sequel / revival films followed, focusing on other members of Shaft's family, in 2000 and 2019. Roundtree reprised his role in both as a supporting character.

In 2014 a Shaft comic book debuted to strong critical reaction, inspired more by the Tidyman novels and written by David Walker of BadAzz MoFo, a blog about Blaxploitation history. Included in each issue of the first arc, A Complicated Man, was a chapter of Shaft's Revenge, the first new novel about John Shaft since Tidyman's death. In Walker's second arc, Imitation Of Life, Shaft gets hired on a low-budget detective film that may or may not be based on his life.

And we can dig it.

For the anime studio, look no further than Studio SHAFT.

"That cat Shaft shows up in these other baaad mutha- / Shut your mouth!":

"But I'm troping about Shaft!/And we can dig it":