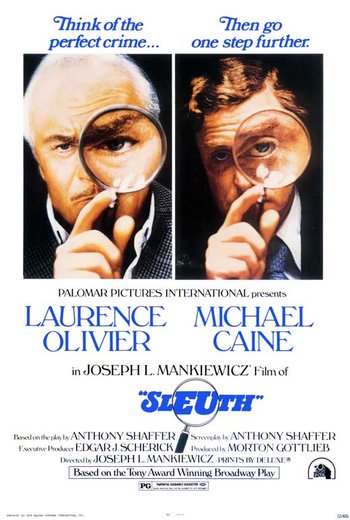 "Andrew... remember... be sure and tell them... it was only a bloody game."
— Milo Tindle
Advertisement:

A 1970 mystery/thriller play by Anthony Shaffer, which has twice been adapted for the screen.

Andrew Wyke, a mystery writer, realizes his wife is having an affair with the middle-classnote (his actual occupation varies from version to version) Milo Tindle. He finds in Milo the opportunity to divorce his wife, but he needs to avoid having to pay alimony. So, he challenges the younger man to rob his house; Milo can get rich off his loot, while the insurance company will handsomely reimburse Andrew. Milo complies; but just as he pulls it off, things get really complicated.

Shaffer himself wrote the adaptation for the 1972 film, which was directed by Joseph L. Mankiewicz and stars Laurence Olivier as Andrew and Michael Caine as Milo. The second film version, released in 2007, was directed by Kenneth Branagh and scripted by Harold Pinter; Michael Caine stars again, this time as Andrew, with Jude Law appearing as Milo.

The play features examples of: