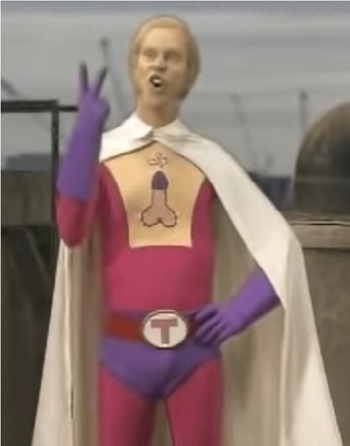 Up yours Delors! Go back to Planet Tranny!
"Yes, Wong very racist. Don't like black or Jew. But black and Jew both like Chinese food. Go figure."
— Mr. Wong, Norbit
Advertisement:

Usually, in modern stories, a character who's a sexist, racist, or something else of that kind is the bad guy. This is mostly due to the present-day realization that prejudice is bad.

Sometimes, either due to a Writer on Board, Values Dissonance, Deliberate Values Dissonance, or something else, a character can get away with opinions that are... controversial. If the excuse is well-done, it can work. If not, it seems like a Karma Houdini. Unless, of course, s/he is punished for it, or forced to undergo a Face–Heel Turn.

It has become increasingly common for heroes of this type to not only have their political incorrectness lampshaded by the author and by other characters, but to be aware of it themselves. This type of "hero" knows his attitudes are wrong but is too proud to give them up, usually due to Honor Before Reason. Or perhaps they are unashamed of their opinions, but compared to the villain they're still the clear hero. He might develop into a Noble Bigot or Troubled Sympathetic Bigot.

Also see Good Flaws, Bad Flaws for a more thorough analysis of "discrimination as a flaw".

Dick Jett might be a brilliant detective, but he's... well, he's metaphorically and literally frozen in the 1950's.

Dick Jett might be a brilliant detective, but he's... well, he's metaphorically and literally frozen in the 1950's.