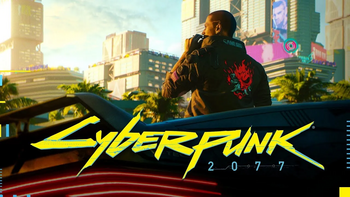 "In 2077, they voted my city the worst place to live in America. Main issues? Sky high rate of violence and more people living below the poverty line than anywhere else. Can't deny it; it’s all true... but everybody still wants to live here. This city's always got a promise for you. Might be a lie, an illusion, but it's there... just around the corner — and it keeps you going. It's a city of dreams. And I'm a big dreamer..."
— V
Advertisement:

Cyberpunk 2077 is an Action RPG game developed by CD Projekt RED based on R. Talsorian Games' Cyberpunk Tabletop RPG. The title is CD Projekt RED's first new property since they started developing The Witcher game series. Unlike the Low Fantasy world of The Witcher, however, Cyberpunk is, as its name suggests, set in a dystopian futuristic world in which ultra-modern technology co-exists with a degenerated human society.

Year 2077. Night City, Free State of California. The world is broken. MegaCorps manage every aspect of life from the top floors of their sky-scraping fortresses. Down below, the streets are run by drug-pushing gangs, tech hustlers, and illegal braindance slingers. The in-between is where decadence, sex and pop culture mix with violent crime, extreme poverty and the unattainable promise of The American Dream. You are V, a cyberpunk. And In a World… of cyber-enhanced street warriors, tech-savvy netrunners and corporate life-hackers, today is your first step to becoming an Urban Legend. But some legends aren't made easy, and yours will be marked with the death of friends, the fall of an emperor, and many other crazy stunts.

The game was released on December 10, 2020 for Microsoft Windows (via GOG, Steam, and Epic Games Store), PlayStation 4, Xbox One and Google Stadia. On February 15, 2022, native versions for the PlayStation 5 and Xbox Series X|S were released, free for those who already owned the previous generation versions via backwards compatability.

website serves as a short guide to the city, much in the style of Grand Theft Auto V.

Wake the fuck up, Troper, we've got examples to burn: